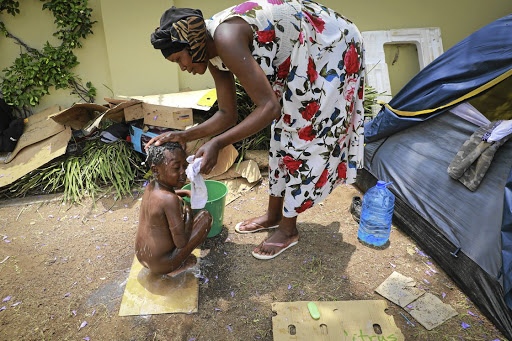 Nanette Kabemba bathes her son next to their tent set up outside the UNHCR office in Pretoria.
Image: Sebabatso Mosamo

An application by residents who want the high court in Pretoria to order the removal of refugees camped in Brooklyn and Waterkloof will be heard only next week.

The matter came before judge Natvarlal Ranchod for a third day on Thursday.

The matter was stood down on Wednesday after a change in the stance of respondents, including the police and home affairs ministers, who are now opposing the application by the Brooklyn and Eastern Areas Citizens' Association and Waterkloof Homeowners' Association.

When the urgent application was first heard on Tuesday, lawyers for the ministers said they would abide by the decision of the court. But their position changed because they felt the orders sought by the associations were not practically implementable.

A bid by residents, who want the high court in Pretoria to order the removal of refugees from their residential areas, will continue to be heard for ...
News
2 years ago

Lawyers for the ministers decided to officially oppose the application by the associations on Thursday.

In terms of a timetable agreed to, the ministers must file opposing papers by next Monday and the application itself was set down for hearing on November 13 (Wednesday).

Residents want the court to interdict refugees camped outside the UN High Commissioner for Refugees' (UNHCR's) offices in Pretoria from contravening bylaws, causing a nuisance and erecting shelters, shacks or tents in the streets.

The refugees, who have been camped outside the offices since October 7, are demanding to be sent to other countries, saying they fear  xenophobic violence in SA.

The associations are complaining about the behaviour of the refugees, whom they accuse of causing a nuisance by defecating, urinating and undressing in public.

SA could withdraw from International Criminal Court (ICC) as the government has started plans to withdraw from the Rome Statute of the ICC.
Opinion
2 years ago

Scores of refugees and asylum seekers evicted during a clash with police in central Cape Town on Wednesday have taken refuge at the Central Methodist ...
News
2 years ago
Next Article