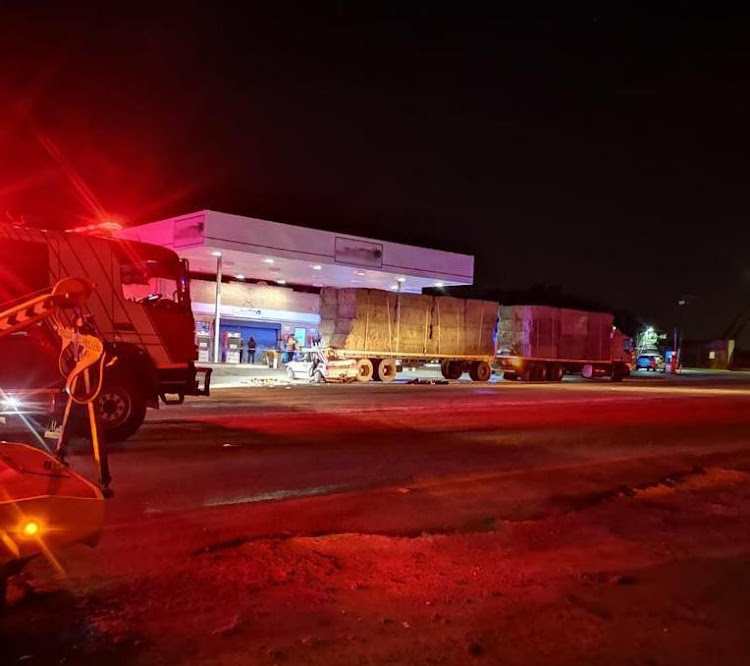 Three people, including a child, were killed when their vehicle crashed into the rear trailer of a truck at a petrol station near Fochville on Friday night.
Image: Supplied by ER24.

Three people, including a child around 8 or 9 years of age, were killed when their vehicle apparently collided with the rear trailer of a truck at a petrol station on the N12 near Fochville on Friday evening, paramedics said.

Another occupant of the vehicle is in a critical condition, ER24 spokesman Ross Campbell said.

He said ER24 paramedics along with provincial emergency medical and other private services were on the scene at 8.35pm.

At least seven people died in a serious accident on the N1 freeway, north of Pretoria, on Friday.
News
2 years ago

“The two adult males in the front two seats of the light motor vehicle had suffered multiple, fatal injuries and were declared dead on arrival. The male child and rear passenger, a man in his 20s, had suffered multiple critical injuries and were treated with advanced life support interventions. The child unfortunately succumbed to his injuries and was also declared dead on the scene. The man was airlifted to a private hospital for further treatment,” Campbell said.

Local fire and traffic departments, as well as police, were on the scene for further investigations, he said.

Deputy minister of mineral resources Bavelile Hlongwa and four other people were run over and killed by a truck on the N1 from Polokwane on Friday.
News
2 years ago

A truck driver died and two people were trapped inside the vehicle after a serious collision on the notorious Fields Hill, west of Durban, on Friday.
News
2 years ago
Next Article