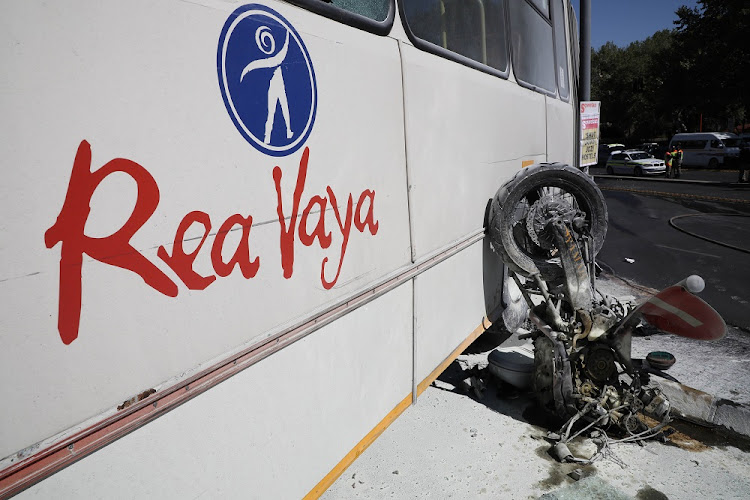 A father and a child died after a Rea Vaya bus ploughed into their motorcycle at Empire road in Parktown, Johannesburg
Image: ANTONIO MUCHAVE/SOWETAN

A father and son died after a collision between a Rea Vaya bus and their motorcycle on Empire Road in Parktown‚ Johannesburg‚ on Tuesday morning.

Minnaar said the father and his 10-year-old son died in the crash.

"The cause of the accident will be investigated. The bus driver is on the scene‚" he said.

At about 8am‚ two bodies lay covered in silver police foil close to the traffic lights at a busy intersection and a petrol station.

The bus‚ with broken windows and damage to the front‚ was parked on the paving at the petrol station.

The motorbike was shred to pieces‚ with part of the back wheel lying next to the bus.

A small pillow lay close the covered body of the young child.

The child attended a school for autism‚ close to the accident scene.

A father and his son have died after a Rea Vaya bus and their motorcycle collided in Johannesburg on September 10 2019. Johannesburg metro police said the cause of the accident which took place on Empire road will be investigated.

Two of his teachers‚ who were also on the scene‚ were overwhelmed with emotions. They broke down in tears when they saw his body covered under silver foil at the robot.

"This is one of our children. His father brings him on the motorbike every morning. He is a very young boy and has been at the school for over a year now‚" the emotional teacher said.

Hillbrow police station spokesperson Captain Musa Shihambe said that the initial report he received stated that the Rea Vaya bus driver was speeding and crossed a red light and crashed into the motorcycle which was dragged under the bus for several meters.

He said that the driver had been taken in for question while female drivers of the two other vehicles that the bus also ploughed into were taken to Millpark and Hillbrow hospitals respectively.

Captain Shihambe said as the police they have taken serious issue with the recklessness of the Rea Vaya bus drivers.

"They are very arrogant and stubborn. They are like the taxi drivers... I think they must be taken again for another test driving because every driver on the road is complaining about Rea Vaya drivers," said Captain Shihambe.

"They are driving very fast, they don't even care and when you talk to them they are so arrogant."

He did not pronounce on what type of charges they were looking to lay against the driver.