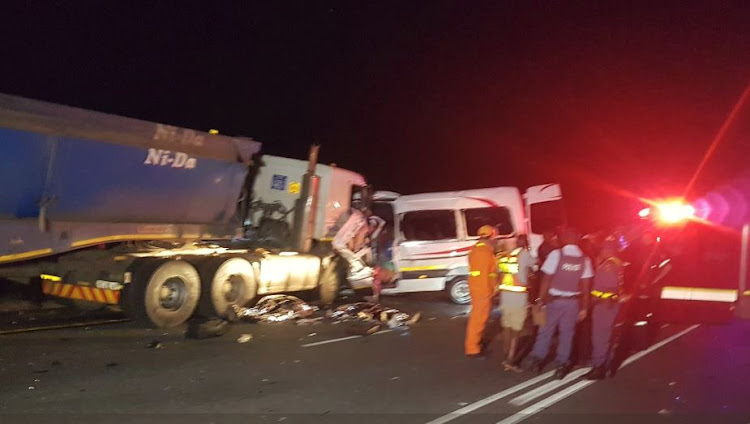 15 people killed in an accident between two trucks, a minibus taxi, and a sedan on the N4 between Mbombela and Matsulu Mpumalanga.
Image: Tumelo Machogo via Twitter

The driver of one of the vehicles involved in an accident that claimed 15 lives on the N4 between Mbombela and Malelane in Mpumalanga on Friday night has been detained by police.

The accident happened on Friday evening when a minibus‚ VW Polo sedan and two trucks collided. The sedan driver has been detained by police‚ according to department of community safety‚ security and liaison spokesman Moeti Mmusi.

“We can confirm that the driver has been detained and police have taken blood samples from him as part of the investigation. We can also confirm that the number of the deceased people has risen to 15 after another person died on way to hospital in the early hours of this morning‚” said Mmusi.

The taxi was travelling from Mbombela to Tonga‚ in the Nkomazi Local Municipality. The accident happened just before 8pm and 14 people were declared dead on the spot.

Mmusi said a task team had been set up by the department to investigate the cause of the accident and visit the family.

“The accident happened when one of the vehicles attempted to overtake on a narrow road. The road is a two carriage-way and as the roads merge‚ they become narrow and one of the drivers was rushing to overtake when the accident happened‚” said Mmusi. The drivers of the other vehicles swerved to avoid the overtaking vehicle and that resulted in the four vehicles crashing. The taxi driver died on the spot together with a number of his passengers‚” said Mmusi.

Mmusi could not confirm if it was the taxi that was rushing to overtake the trucks.

“The investigations are continuing but we can safely confirm that the driver of the sedan has been detained as the police are busy with their investigation‚” he said.

The ages of the deceased victims could not be confirmed by Mmusi.

MEC Pat Ngomane was one of the first people to rush to the scene of the accident on Friday night along with provincial authorities.

“The investigation of what happened is already under way and being done by officials‚” said Mmusi.

Department officials and police are expected to visit the families of the deceased people at Nkomazi municipality on Sunday.