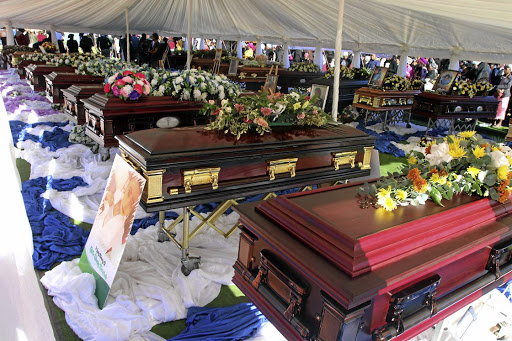 Coffins are lined up in two rows during the funeral service of 21 of the 24 victims of the collision between an overloaded minibus taxi and a bus June 16. The service was held in GaRapitsi Vilage in Kgapane at the weekend.
Image: ANTONIO MUCHAVE

Emotions ran high during the mass funeral of 21 taxi crash victims when their names were read out at the service.

Social workers had their hands full as they tried to calm relatives and neighbours who attended the funeral of 21 of the 24 young people who died when a taxi they were travelling in collided head-on with a bus along the R81 near Maphalle village on June 16.

Lolo Ramango, head of social work services in the Greater Letaba local municipality, triggered people's emotions when she started reading the names of the deceased.

The coffins of the 21 victims were lined up under a marquee during the funeral at a local sports grounds in GaRapitsi village in Bolobedu, Limpopo, on Saturday.

Police said the victims were aged between 13 and 27. One of the victims, 20-year-old Stanley Makola, was buried separately in GaMoshakga village, also in Bolobedu, while the other two were also buried yesterday.

"The Makola family requested to be allowed to bury their loved one separately because the musical band for which their son belonged to wanted to celebrate his life through music," said family spokesperson Janquas Mafa.

He further said they appreciated the support from various stakeholders who contributed towards affording dignified funerals for the departed.

19 school pupils among the dead
News
1 year ago

Mafa also expressed gratitude to community members who supported them since the accident which happened between Mooketsi and Giyani.

"Let us allow both the department of transport and the police to conduct their investigations into the cause of the accident," he said.

All those who died were occupants of the minibus taxi. One of them is still hospitalised. The driver of the bus escaped with minor injuries.

Mbalula said a report into the cause of the accident was expected to be released within a month. He said he was worried that preliminary investigations had revealed that the taxi in which the deceased were travelling in had been overloaded.

"The taxi was supposed to carry 15 passengers, but it was carrying 10 more passengers. This is not right," Mbalula said.

He further urged community members to work with traffic officers and the police to ensure that unroadworthy vehicles were removed from the road.

"People must refrain from giving 'Coke' to our traffic officers. Let's stop bribing traffic cops," he said, adding that the law was going to "bite" those found to be engaging in corrupt activities.

Mathabatha said his observation lately was that there was an improvement on the part of taxi drivers on the roads.

"Taxi drivers now have the decency to give way to other motorists. They have improved dramatically. But truck drivers remain a problem," he said.