Six nabbed in Cape Town after being found with illegal firearms, stolen vehicle 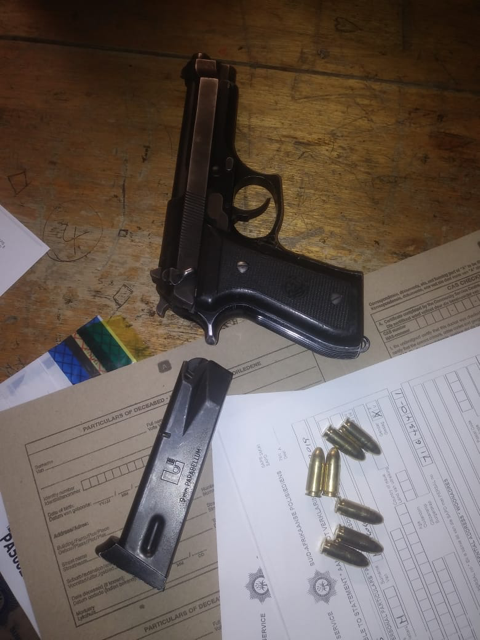 The firearm seized by Flying Squad members from suspects in Gugulethu on Sunday night.
Image: SAPS

While conducting crime prevention patrols in Gugulethu on Sunday night, a suspicious-looking vehicle drew the attention of the squad.

"The vehicle was pulled over and searched, which led to the discovery of a prohibited 9mm pistol and seven rounds of ammunition," said Western Cape police spokesperson Lt-Col Andrè Traut.

The vehicle's four male occupants, aged between 26 and 32, were arrested.

The officers were already fired-up from another arrest earlier in the day after they reacted to a radio broadcast that a Hyundai delivery vehicle had been hijacked in Khayelitsha.

"They patrolled the area in search of the vehicle and found two suspects in the process of removing the canopy on the side of the road. The two adult males who were also found to be in the possession of a prohibited 9mm pistol were arrested," said Traut.

"Once charged, the six suspects are due to make their respective court appearances in Athlone and Khayelitsha," he added.

Unsuspecting traffic cops stumble into a saga of guns, cash and booze

A complaint about a man threatening staff at a motor dealership quickly spiralled into a case involving illegal guns, stacks of money and an ocean of ...
News
2 years ago

Theft of over 100 guns sparks fears

Crimeexpected to hike after robbery of gun shop.
News
2 years ago
Next Article