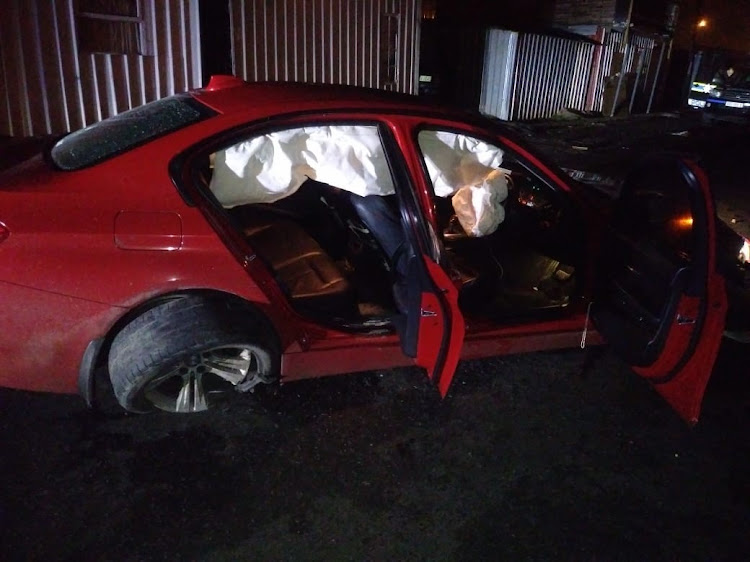 A hijacker was arrested after he knocked over and killed a pedestrian during a high-speed chase with SAPS officers.
Image: SAPS

A pedestrian was knocked over and killed by alleged hijackers during a high-speed chase that ended with one of the suspects being arrested at the weekend.

Police were notified of the robbery after a man was shot and wounded in Mfuleni, Cape Town, and his red BMW was spotted shortly afterwards in the early hours of Sunday.

SAPS spokesperson Lt-Col Andre Traut said at about 1.30am police on patrol “reacted to a radio broadcast of a red BMW that was hijacked in Mfuleni, where the complainant was shot and wounded”.

“The vehicle was spotted and following a high-speed pursuit, where a pedestrian was knocked down and killed by the fleeing robbers, the vehicle came to a stop in Sheffield Road, Browns Farm.”

One suspect was arrested, while another escaped on foot. Police discovered a 9mm pistol.

In another hijacking incident in Cape Town, a suspect was shot and wounded as police gave chase. He was arrested when the vehicle came to a halt in Khayelitsha in the early hours of Sunday. Imitation firearms were seized.

“One of the suspects pointed [at] the SAPS members with a firearm, which prompted them to take action by wounding the suspect,” said Traut.

Once charged, the three suspects are due to make their respective court appearances in Athlone and Khayelitsha.

A Johannesburg man who was hijacked, then shot twice before being driven around while blindfolded has accused police of dragging their feet in ...
News
2 years ago
Next Article