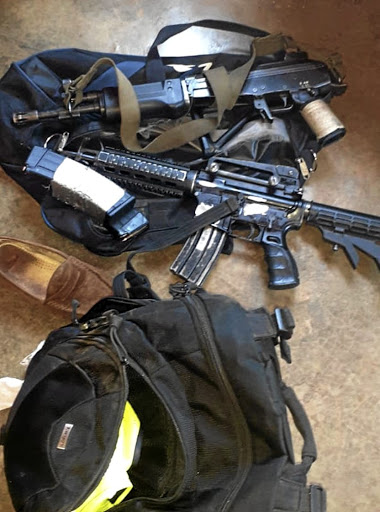 Some of the rifles and live ammunitions recovered.

A 25-year-old Limpopo woman is expected to appear in the Tzaneen magistrate's court after she was found in possession of two R5 rifles and 111 rounds of live ammunition in her house on Saturday.

The bust followed a tip-off about a suspected stolen white Mercedes-Benz parked in a yard in Thabina village outside Tzaneen.

Police spokesperson Brig Motlafela Mojapelo said they had already expanded their investigations and were also looking for another male suspect believed to be involved in serious crimes.

Sowetan has learnt that police are pursuing a well-known Limpopo criminal who is believed to be the owner of the illegal firearms.

According to the police report, which Sowetan has seen, police have gathered information linking the firearms and vehicle to a well-known man from Lenyenye township who is alleged to be on the loose.

A local community policing forum member, who wished to remain anonymous, said: "The wanted man is known to be a hardened criminal who allegedly committed a series of cash-in-transit heists. He always escapes the police. Early in the year, I nearly arrested him for hijacking but he sped off."

Three firearms – two of them allegedly stolen from security guards and a third licensed to an owner in East London – were seized when police stopped ...
News
2 years ago

The member said the wanted man was linked to a series of car hijackings and cash-in-transit robberies in the area.

"He has many cases to answer to at Maake police station, but he is always ahead of the police. Just have a look at those firearms police recovered and tell me if such a person deserves to be in society," he said.

Mojapelo said police discovered items that could have been used in other crimes on the premises of the 25-year-old woman.

He said a white Mercedes-Benz was reported stolen in Burgersfort this month.