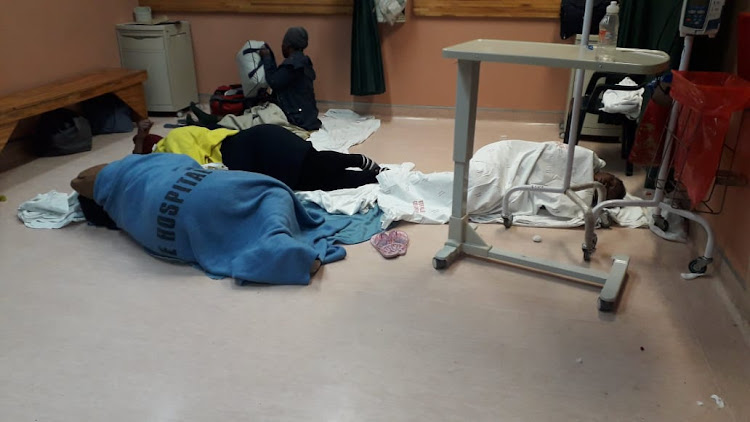 Women were allegedly made to sleep on the floor of Edenvale Hospital's maternity ward, prompting an investigation by the Gauteng health department.
Image: Supplied

A new mother has recalled the “nightmare” she suffered after being admitted to an overcrowded maternity ward at Edenvale Hospital in Gauteng.

Brigett Hlongwane, 27, said she was among 15 women who were cramped in a ward meant to accommodate four people.

The ward only had two beds, and more than a dozen heavily-pregnant women were forced to sleep on the floor while they waited for available beds, according to Hlongwane.

“I was lucky to have had a bed, but it was not nice seeing all these women sleeping on the floor. No one deserves that; not when they are pregnant — at the advanced stage of their pregnancies even,” she told SowetanLIVE sister publication TimesLIVE.

Hlongwane took to social media on Tuesday to speak about the conditions at the hospital after being admitted for three days. It was not just about sleeping on the floor, she said.

It's been hard, but we're going to get things right: Gauteng health MEC promises big changes

Two months into the job, newly-appointed Gauteng health MEC Dr Bandile Masuku says his journey has been a roller-coaster ride so far.
News
2 years ago

“It was not good at all. Can you imagine what it's like to bath using cold, literally freezing, water. One can’t even refuse to bath because check-ups need to be done,” she said.

The images she shared were met with outrage.

“This situation opens patients up to infections and potential illnesses. We requested the hospital to give us a detailed explanation of what led to this. It is simply unacceptable for patients to be sleeping on the floor. We need to plan better and respond quickly in facilities to avoid such situations,” said Masuku.

A nurse at the hospital, who spoke on the condition of anonymity, confirmed that over-crowding was an ongoing issue.

“We have a crisis, really. We’ve had over 20 patients in one ward who had no beds in one go,” she said.

Asked why heavily-pregnant women were not prioritised when beds were allocated, she said only management could take decisions.

Unions have called for a senior manager at an East Rand hospital to be charged for allegedly trying to conceal the true extent of the facility's ...
News
2 years ago

“We have been complaining, even the pregnant women, for a while now, with no response. It's unfortunate that management had to act only when the situation was made,” she said.

Hlongwane, who was discharged on Tuesday, said she was relieved that action had finally been taken.

“I am glad I’m going home knowing I made some difference. Management was angry that someone put the information in the public [domain]. But most of the women were allocated beds and some were given chairs while other plans were being made,” she added.

In an earlier interview with TimesLIVE, Masuku cited Jubilee, Bheki Mlangeni, Tambo Memorial, Mamelodi, Edenvale, Thelle Mogoerane and Tembisa hospitals as among the 10 worst-performing hospitals in the province.

With his portfolio allocated at least R50.8bn, he said he wanted to improve the conditions at the facilities.

Corpses kept on beds in North West hospital for days

Nurses at a North West hospital have been forced to play a game of musical beds with mothers waiting to give birth.
News
4 years ago