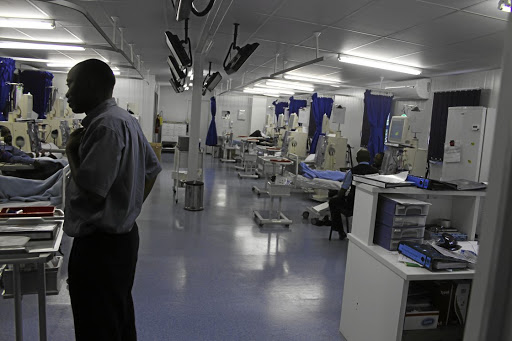 Private hospitals and clinics in Cape Town found themselves dealing with a different kind of client yesterday when sickly and poor patients arrived to demonstrate their frustration with the slow progress in implementing National Health Insurance (NHI).

Under the banner of Movement for Change and Social Justice - a grassroots organisation from Gugulethu that campaigns for better healthcare services in townships - patients arrived at establishments including Life Vincent Pallotti Hospital in Pinelands, Netcare Christiaan Barnard Hospital in the city centre, Crescent Clinic in Kenilworth and various Melomed hospitals.

The organisation, which is supported by social health lobby groups such as Health Enabled and the Public Health Movement, demanded that NHI be implemented quickly and wanted clarity on how the state intends to implement universal free healthcare.

Mandla Majola, who led the group and took a depression patient to Crescent Clinic, decried the public healthcare system. State clinics in the townships were overcrowded, he said, and the government had failed to build new healthcare facilities.

Speaking to Crescent Clinic manager Zandre Finkelstein, Majola said the protest was a "peaceful demonstration" of poor people's plight and was not an attack on private hospitals.

Finkelstein said the healthcare system was broken at the medical aid level because of the need to make profits, adding that the clinic had admitted patients who needed emergency care before they were transferred to public hospitals.

Peter Benjamin, chief executive of HealthEnabled - which helps government integrate life-saving digital health interventions into their health systems - said it was "unjust" that only 16% of South Africans had access to good, quality healthcare.

Health Minister Aaron Motsoaledi said the National Health Insurance (NHI) may be referred to as ‘Ramaphosa-care’ - as the president is now in charge ...
News
2 years ago

Yesterday's protest included the presentation of a memorandum at parliament.

Michelle Norris, spokesperson for Christiaan Barnard Hospital, said a small group of demonstrators arrived but "they couldn't clearly say why they were here ... they kept on saying they are waiting for the person in charge".

She said that while the hospital stabilised critically ill people who did not have medical aid, before transferring them to public hospitals, "nobody looked critical or ill in the group".

Under NHI, contracted private healthcare facilities will be required to provide services to the public sector.

The system would pool funds contributed by all South Africans into the NHI fund.

Health minister Aaron Motsoaledi recently said the proposed scheme, which was piloted at 10 districts in SA about seven years ago, was too big an issue to be dealt with by the minister of health.

He said he had asked President Cyril Ramaphosa to take over the roll-out of the scheme, since only the president had the power to make it a reality.