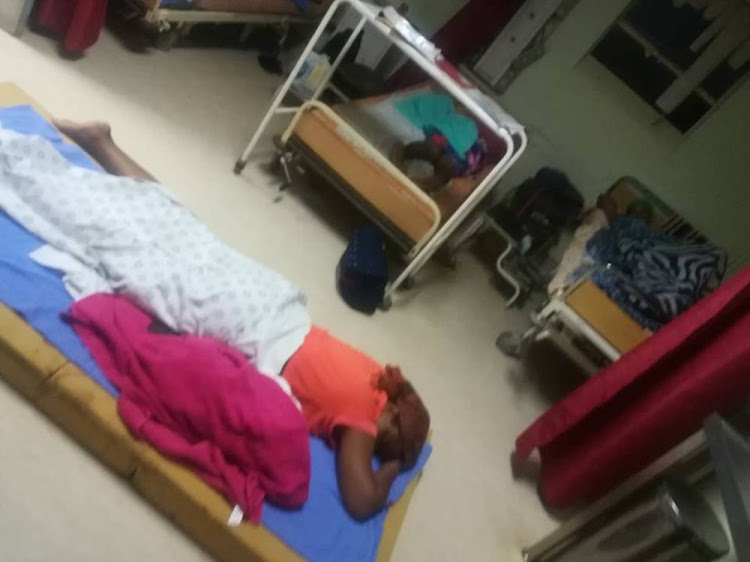 A mother lies next to her baby in the maternity ward of Bophelong Hospital in Mahikeng. Image: FACEBOOK

A picture of a woman lying with her newborn baby on a mattress placed on the floor of the maternity ward at the Bophelong Hospital in Mahikeng has gone viral‚ thrusting the apparently overcrowded hospital into the spotlight.

On Monday‚ the North West Department of Health told the publication that it was aware of the crisis at the hospital.

"There is a planned expansion of beds. The situation is worsened by the fact that Lehurutshe is also referring operations of caesarian sections to Mafikeng due to non-operation of their theatre‚" said department spokesman Tebogo Lekgethwane.

Lekgethwane said the Lehurutshe had since fixed up its maternity ward and the situation was expected to improve.

Lekgethwane could not immediately say how many patients the ward was certified to admit‚ neither was he able to provide answers on whether the department had deployed more staff to deal with the overcrowding.

During the state of the nation address debate‚ EFF MP Delisile Ngwenya called on President Cyril Ramaphosa to address the situation at the hospital.

"As we speak now‚ Mr President‚ At Bophelong Hospital Mafikeng‚ North West‚ their maternity ward looks like where you would keep your buffalos‚" Ngwenya said.

"New mothers are subjected to the most degrading conditions where they even have to sleep on the floor with their newborn babies‚" she added.

"When I was in Bophelong Hospital on the 17th Dec 2017… the nurses told us there was a person trying to steal babies from our ward‚ I had to guard my baby the whole night‚" one former patient said on Facebook.

When I was in Bophelong Hospital on the 17th Dec 2017 and the nurses told us there was a person trying to steal babies from our ward, I had to guard my baby the whole night...

More than 200 patients evacuated from a Cape Town hospital after a fire broke out on Saturday have been given the green light to return.
News
3 years ago

The lives of patients with kidney problems are being put at risk at Charlotte Maxeke Academic Hospital.
News
3 years ago

A patient succumbed to fatal burn wounds when a fire engulfed part of a ward at Groote Schuur Hospital in Cape Town.
News
3 years ago
Next Article