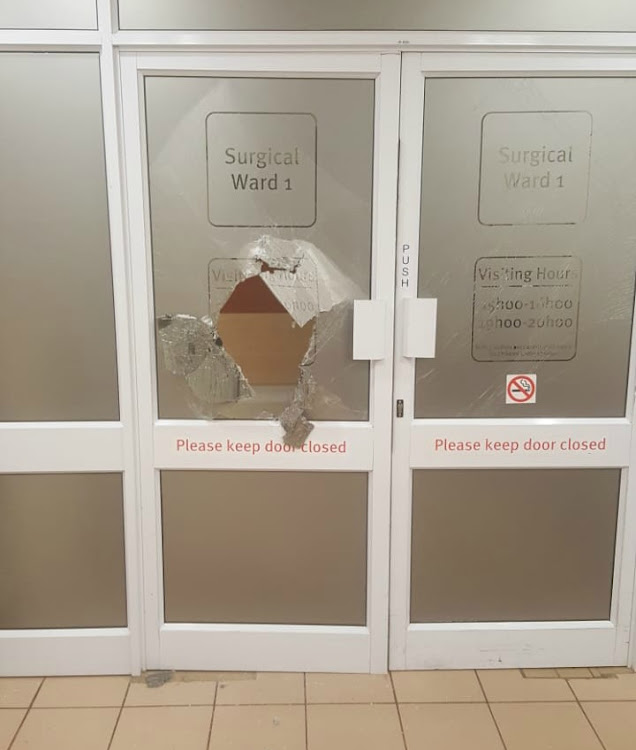 The doors to a ward at St Augustine's Hospital were damaged during a brazen robbery on Wednesday morning.
Image: Supplied

A gang of men overpowered guards at Durban's St Augustine's Hospital before brazenly robbing staff and making off with televisions, cellphones and a microwave in the early hours of Wednesday morning.

In a statement released by Netcare, hospital manager Heinrich Venter said the incident took place around 2.45am.

"Four individuals, some of whom were armed, entered the hospital in the early hours of the morning after holding up security guards, while one remained in a getaway vehicle."

Venter said the robbers held up four staff members - two in an office near the reception area, and two in a ward.

They were all robbed of their personal belongings.

"One of the robbers also entered the room of a patient, but left without taking anything when the patient shouted at him to get out.

"The robbers then left the ward, damaging its door in the process. The robbers also took two television sets and a microwave from the coffee shop located in the main reception," said Venter.

Police in Polokwane have launched a manhunt for an armed robber who robbed two roommates of their belongings after raping one of them on Sunday ...
News
2 years ago

He said a security guard received a blow to head, while a staff member was hit in the face.

"We are grateful that they did not suffer serious injury and that no other persons were physically harmed. The security guard and staff member were treated in the emergency department and discharged."

He said that day-to-day operations at the hospital had returned to normal.

He added that while security at the hospital was of a "very high standard", it would be "reviewed in consultation with the contracted security services provider to ensure the safest possible environment for all on the premises".

Police spokesperson Col Thembeka Mbele said a case of robbery was being investigated.