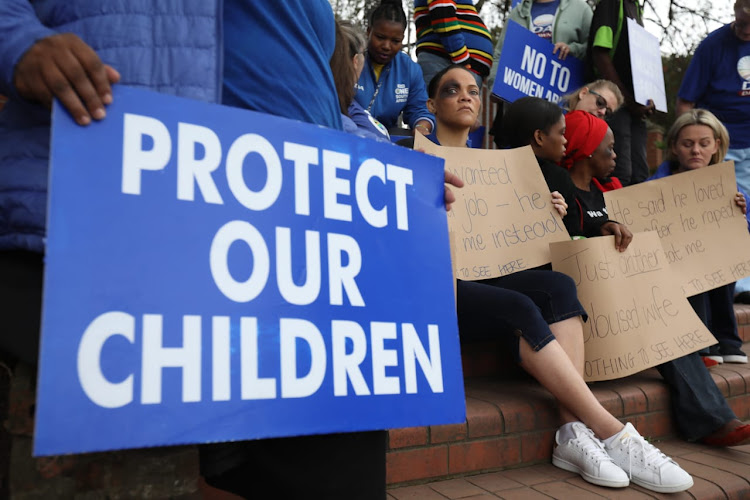 Pinetown residents protest outside the magistrate's court ahead of the sentencing of a serial rapist Moses Mavila. Mavila was handed down a sentence of 32 life terms on Friday.
Image: Sandile Ndlovu

In a final act of defiance, serial rapist Moses Mavila turned to the packed gallery at the Pinetown magistrate's court and said: "I'll be back."

This was just moments after he was sentenced to 32 life terms in jail.

Mavila - dubbed the "highway rapist" for the manner in which he attacked his victims at spots along the busy M19 freeway - was convicted of 32 counts of rape committed between 2016 and 2019.

Just In: Moses Mavila, the #HighwayRapist has been sentenced to 32 terms of life imprisonment @TimesLIVE @yasantha pic.twitter.com/wlJQPIEJuG

Handing down her sentence, magistrate Bilkish Asmal said that the crimes showed a level of disrespect for a woman's bodily integrity.

"These are serious offences that the court has to deal with every day. The victims in this matter were law-abiding citizens who were desperate for employment and were stripped of their dignity and humanity," he said.

Mavila appeared unfazed as Asmal lambasted him for showing no remorse.

"You lack the capacity for mercy, which you now want the court to give you," she said

The gallery filled with Mavila's victims and their supporters let out a sigh of relief as the sentencing was handed down, shouting "you are disgusting" as he left the dock.

It was also revealed in court that Mavila, a Mozambican national, was in the country illegally and that he continued on his rape spree simply because he was not caught.

He was also sentenced to a further 15 years for robbery and 10 years each for two counts of attempted rape.

MEC for social development Nonhlanhla Khoza, who was in attendance, said that she hoped that Mavila's sentencing would act as a deterrent.

A 57-year-old Limpopo pastor found guilty of two counts rape - including that of a minor - was on Monday released on R200,000 bail pending sentencing ...
News
2 years ago

A 37-year-old man who offered two teenage girls a lift home, but instead drove to a hidden spot and raped one of them, was sentenced to life ...
News
2 years ago
Next Article