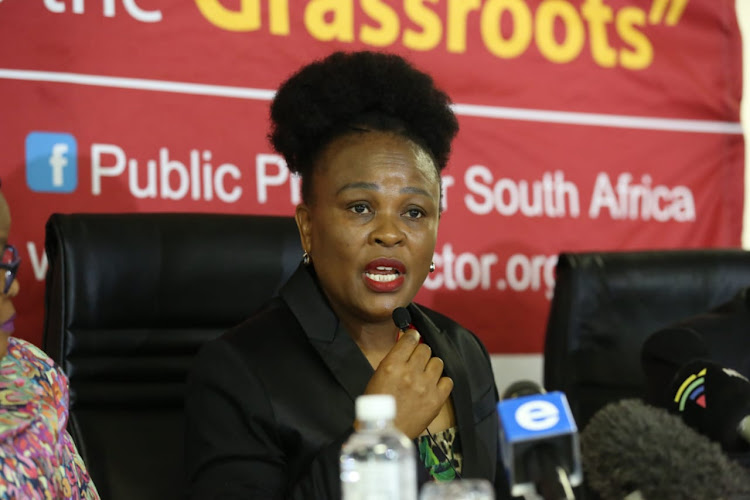 Mkhwebane's spokesperson Oupa Segalwe confirmed that they had received a complaint against De Lille.

The complaint appears to be part of the ongoing fight between De Lille and the department's director-general Sam Vukela.

In the complaint, the anonymous complainant places Vukela at the centre of alleged "victimisation" by De Lille.

The minister yesterday said she was convinced the complainants were corrupt elements in the department that she was dealing with.

She added that she would cooperate with Mkhwebane in her investigation of the complaint.

The Office of the Chief Justice has warned the public about a fake Twitter account purported to belong to Gauteng high court Judge Sulet Potterill.
News
2 years ago

"The faceless and nameless people [behind the complaint] are part of the corrupt people that I am dealing with and the SIU (Special Investigating Unit) is investigating," De Lille said.

"I will not be deterred by them. They know that law-enforcement agencies are after them. I will give full cooperation of the allegation they allegedly sent to the public protector."

Vukela has been under fire following a damning public service commission (PSC) report against him, which recommended that he faces the music for his role in the irregular appointment of several senior managers.

The complaint at Mkhwebane's office was lodged the same week that De Lille was meant to share her input with the PSC on their second investigation.

In the complaint, it is alleged that De Lille was "causing stress" to Vukela such that his wife had allegedly left him.

However, Vukela distanced himself from the complaint, saying people who were obsessed with sowing confusion within the department were behind it.

That diplomatic passport should now be confiscated since her husband is no longer a cabinet minister.
Opinion
2 years ago

"I reject the assertion with the contempt it deserves and I am not interested in furthering the motives of faceless people whose purpose is to promote confusion in the department of public works and infrastructure," he said.

The allegation of nepotism against De Lille for allegedly hiring a Cynthia Jefferys, who is alleged to be her sister, is not rearing its head for the first time.

The ANC's Songezo Mjongile had made the same claims in 2011 when De Lille was contesting for Cape Town mayorship under the Democratic Alliance.

Among other allegations raised in the complaint are that De Lille instructed Vukela to appoint a company that allegedly bankrolled the minister's home. The complainant alleges that the company is "another Bosasa".

"She goes to public works to look for reasons to appoint this company," reads the complaint.

"Just after her appointment, the minister stopped the disposal of land as she and her family were not benefitting, again interfering in procurement."

Ekurhuleni mayor Mzwandile Masina says South Africans need to have a conversation about the judiciary as it's the only arm of state which has a final ...
News
2 years ago

Protector in red is loss in court

Like fighter bulls, courts get mad when they see her in red.
Opinion
2 years ago
Next Article