After 25 years of waiting for services, Ncwadi erupts in protests 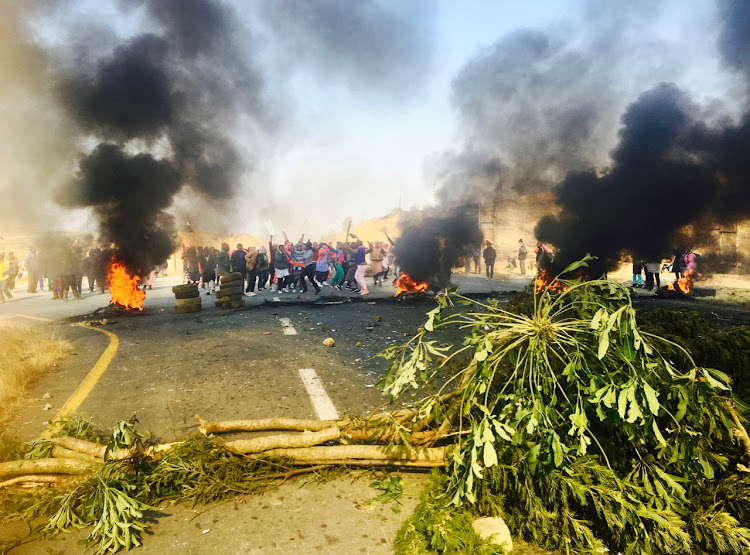 Police used rubber bullets, stun grenades and teargas to disperse a protest by about 1,500 residents from Ncwadi, near Pietermaritzburg, on Monday.
Image: GroundUp/Nompendulo Ngubane

Police used rubber bullets, stun grenades and teargas to disperse a protest by about 1,500 residents from Ncwadi, Pietermaritzburg, on Monday.

The residents had barricaded the R617 with trees, stones and burning tyres. They were protesting against the absence of development in the area, the bad condition of the roads, the lack of housing and water problems.

“Since 1994 there has been no change in this ward. There is not even one RDP house,” said resident Busi Makhaye. “We have never protested before. The community was trying to give the government a chance. They have been taking us for granted for a very long time. The residents fix the roads themselves. We come in numbers using our own tools to fix the roads with stones,” she said.

Unhappy residents attacked the City of Johannesburg’s Jabavu Customer Centre with two petrol and a tyre early on Friday morning.
News
3 years ago

“Are we animals? Now that we are doing what other communities are doing, police shoot at us. Protesting is the last option but we had no choice,“ said Makhaye.

“For the past 25 years this ward is like a forest,” said community committee member Owen Mkhize.

He said they had tried to meet with the municipality. “They don’t come to us to hear what the residents want. Last year in February the Msunduzi municipality mayor Themba Njilo sent a team. They came and made empty promises. Nothing has happened. They have never told us anything since that gathering,” said Mkhize.

“The roads are a mess. The only tarred road in this ward is the main road – the one we have shut down. Others are bare and have potholes which have become holes,” he said.

“Drivers refuse to take our young ones to school when it rains. The taxi drivers would leave us 10 or more kilometres away from our destination. They can’t use these roads because they are so bad. Children have a right to go to school. What kind of a government would allow such things to happen?” asked Mkhize.

Makhaye wants the mayor of Msunduzi to go to Ncwadi and address the residents.

The chairperson of the Select Committee on Cooperative Governance, Traditional Affairs, Human Settlements, Water and Sanitation, China Dodovu, on ...
News
3 years ago

Asked about the lack of development, Msunduzi municipality spokesperson Thobeka Mafumbatha said the area had received boreholes and water tankers providing water. She said a housing project was in the planning phase.

“The community was addressed by the person from the transport department regarding the issue of the road. Let us also be mindful of the fact that they only have been with Msunduzi for three years,” said Mafumbatha.

Ward councillor Thandiwe Madondo (ANC) said high mast lighting, bus shelters and toilets have been installed in the past three years and some roads have been gravelled. She said new boreholes had been drilled.

Madondo said they were busy negotiating for a reservoir to supply clean tap water and the transport department was negotiating the road upgrade.

“I don’t know what was happening in the 22 years at Ingwe municipality ... Here at Msunduzi municipality there is lot planned,” she said.

Police spokesperson Col Thembeka Mbhele said the situation had quietened down and police are monitoring it.