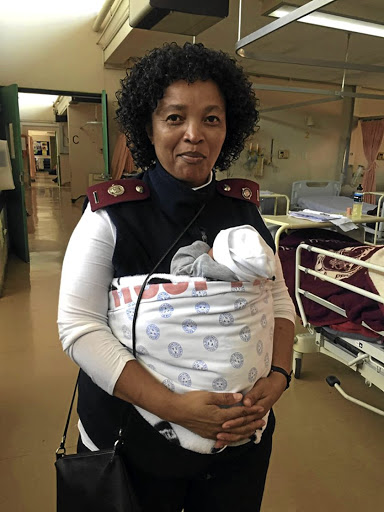 Nurse Nomalungelo Mavimbela 'serves with a smile' and goes an extra mile to provide kangaroo care.

Bad attitude towards patients shockingly made up 70% of complaints from the public at Pholosong Hospital in Tsakane, East Rand, so management took a stand and launched an 'I serve with a smile' champions' campaign.

The campaign was launched recently after an analysis was done on patients and showed that staff at the hospital had a bad attitude which in turn hindered service delivery.

Hospital acting CEO Dr Ashley Mthunzi said after looking at the nature of complaints he received from patients, he decided to find a solution to making the hospital "a happier and more welcoming facility for both the public and staff".

"After analysis on the daily complaints I received, I realised that 70% of them were related to a bad attitude of the staff towards the patients, poor management of queues, rudeness of nurses when patients enquired about something, and so I introduced the 'I serve with a smile champions'.

"All staff members were trained on the importance of being kind and showing love to patients by serving with a smile," he said.

Mthunzi said the initiative has also helped staff to better their communication with each other and to be aware of attending to queues and assisting people when they were lost with a smile.

"I said... let us challenge culture and ascribe to ubuntu [humanity] by considering the feelings of other people and making a health facility a place where people come to get relief from pain and hope for recovery," he said.

Gauteng health spokesperson Lesemang Matuka said the department was inspired by the steps taken by the hospital workers to ensure patients' comfort.

"Being a public servant is not a status, but a true call to serve with humanity and dignity," Matuka said.

He said he was confident that the initiative would be adopted by all public institutions across the country.

Simphiwe Mahlangu, who was badly treated at a government hospital recently, said the campaign was a good initiative.

"I received bad service from nurses for over a week during my stay and do not wish for anyone to go through that, especially when you go there without a choice because you don't have medical aid," said Mahlangu.

Nurse asks to use pregnant patient's cellphone torch during surgery

Mere days after a patient at the RK Khan Hospital in Chatsworth was filmed with maggots in his mouth, doctors allegedly asked a patient if they could ...
News
2 years ago

Two state nurses who were reported missing by their families six months ago have been located at a Sangoma training camp in New Brighton.
News
2 years ago
Next Article