By-election base test for rival parties 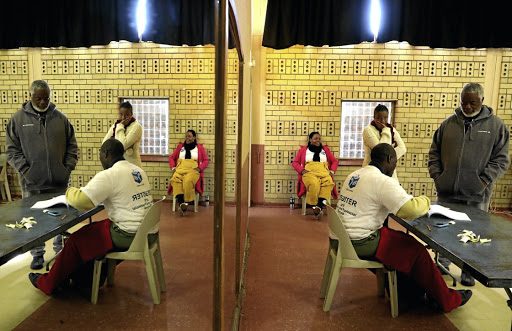 Voting takes place at Ward 54, with 19 757 registered voters, which became vacant because of the councillor's resignation. / SANDILE NDLOVU

Political parties in four wards in Johannesburg want to use the results of by-elections held yesterday to rate their support in local government.

The ANC, DA and EFF contested four wards in the City of Johannesburg yesterday, and said results would give them an indication of whether their parties are making any progress or not.

Ward 54 is in southern Johannesburg; Ward 109 includes Wendywood, Marlboro and sections of Alexandra; Ward 112 is in Midrand; and Ward 83 is in Roodekrans.

All four wards belonged to the DA and had to be contested due to resignations and death.

In 2016 the ANC lost the Tshwane and Johannesburg metros to the DA. However, the May elections showed that the DA's support nationally declined by 1.4%, raising the hopes of its rivals.

The ANC has pleaded with Western Cape premier Alan Winde not to waste his energy on fighting for control of the police and railways.
News
2 years ago

ANC Johannesburg spokesperson Jolidee Matongo said it was important for the party to win all four wards after retaining the Gauteng province in May.

"If you look at the May national elections, we moved from 45% to 49% when comparing to 2016 in Johannesburg. It is very important to see that the work we are doing on the ground is concentrated towards regaining the city in 2021," he said.

DA constituency membership chairperson in Johannesburg Brenda Kok said the party wanted to retain what it had in order to deliver on its mandate.

"It is very important for us to get good results in order to be able to deliver services to the people," Kok said.

EFF candidate for Ward 54 Simphiwe Hogana said the party had not done well in areas such as Mondeor and that has to change.

"We want this ward to be the first one won by the EFF in a by-election. Prospects are there for us to achieve that. We need to show that we are making inroads in the predominantly white suburbs."

At the Ward 54 voting in Mondeor, most of the voters came in cars, hardly spending five minutes in the polling station as there were no queues.

Another resident, Cynthia Bimray, said the area had enjoyed councillors who were helpful to the community and that had to be maintained.

"Voting at local level is important. If you don't vote, then you don't have a say. You can't criticise if you have not voted," she said.

ANC will not allow EFF to take over Tshwane - Kgosi Maepa

The ANC in Tshwane will step in to assist the DA in the city following its fallout with the EFF.
News
2 years ago
Next Article