Storeroom set alight as protests erupt once again at UKZN 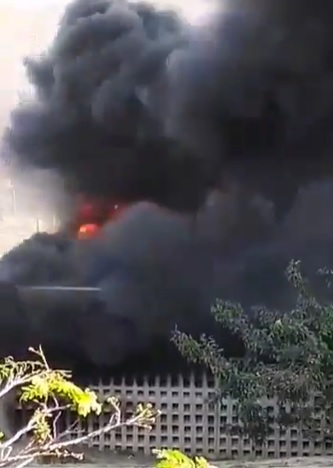 A screenshot from a video circulating online shows part of the Oval Residence at UKZN's Westville campus on fire
Image: Supplied

Chaos again erupted at the University of KwaZulu-Natal's (UKZN's) Westville campus on Wednesday following a spate of protests by students.

In a video circulating online, plumes of black smoke can be seen emanating from near the Oval Residence, opposite the Sports Management Centre.

It is understood that the students set alight a furniture storeroom that is separate from the student residence.

No one was injured in the fire, which is believed to have started about 2pm and has since been extinguished.

The extent of the damage to the building is not yet known.

In a press statement attributed to the executive director of corporate relations at UKZN, Ashton Bodrick, it was noted that groups of protesting students caused disruptions at the Westville and Howard College campuses on Wednesday.

Students @UKZN Westville campus have yet again embarked on protest action - this is part of the Oval Residence, opposite the Sports Centre. UKZN has confirmed the incident and say security and police are on scene

"The protesters disrupted some lectures and committed arson, causing grave damage to university property. University management will not tolerate violence, damage to property, nor the intimidation of students and staff."

UKZN said that it had opened a case of public violence and was reviewing video footage of the violence that occurred during the protests.

It said the footage would help the police catch those found to be implicated in criminal behaviour.

"Every effort is being made to ensure that the academic programme continues uninterrupted. Management is engaging with student leaders to address the grievances they have raised," the statement read.

Lectures to resume on Monday as DUT and SRC strike truce

The trouble-ridden Durban University of Technology, which has been plagued by protests and disruptions in the past month, has found common ground ...
News
3 years ago

The Mangosuthu University of Technology (MUT) student representative council (SRC) was granted an interim interdict to stop the university from ...
News
3 years ago
Next Article