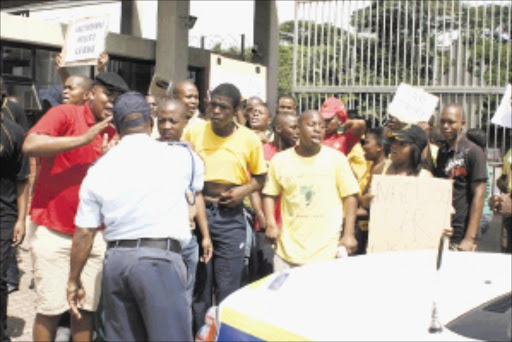 Mangosuthu University of Technology students have won a court bid preventing the university from kiciking them out of residences.
Image: THULI DLAMINI.

The Mangosuthu University of Technology (MUT) student representative council (SRC) was granted an interim interdict to stop the university from evicting students from residences.

The SRC brought the urgent interdict on Thursday morning after students received notice from the university asking them to vacate all campuses and residents on Tuesday.

“Regrettably‚ all students must vacate all campuses and residences by 4pm today‚ February 19 2019. No student will be allowed to remain on campus and therefore they should remove all their belongings‚” Dr Enoch Duma Malaza‚ vice-chancellor‚ said in a notice posted on the university's website.

Seven arrested for public violence at Mangosuthu University of Technology

Seven students were arrested for public violence at the strife-torn Mangosuthu University of Technology (MUT) in Durban on Monday.
News
2 years ago

The notice came following a day of protest at the university's Umlazi campus‚ where students blockaded the entrance to the institution with boulders and bricks and allegedly overturned a car. Eight students were arrested for public violence.

Speaking to SowetanLIVE outside the Durban high court on Thursday‚ MUT SRC president Codesa Gwala said: "Currently we are very happy as students. We are going to celebrate this very much. We are very disappointed because what we saw in MUT were black people‚ who were going to give us guidance as our parents‚ but currently they are not doing that."

Gwala said that some students were forced to sleep on the streets after they were kicked out of their residences.

The Durban high court has granted DUT a temporary interdict barring students from protesting near any of their campuses.
News
2 years ago

The matter will be back in court on Friday where the university is expected to file its response.