Lectures to resume on Monday as DUT and SRC strike truce 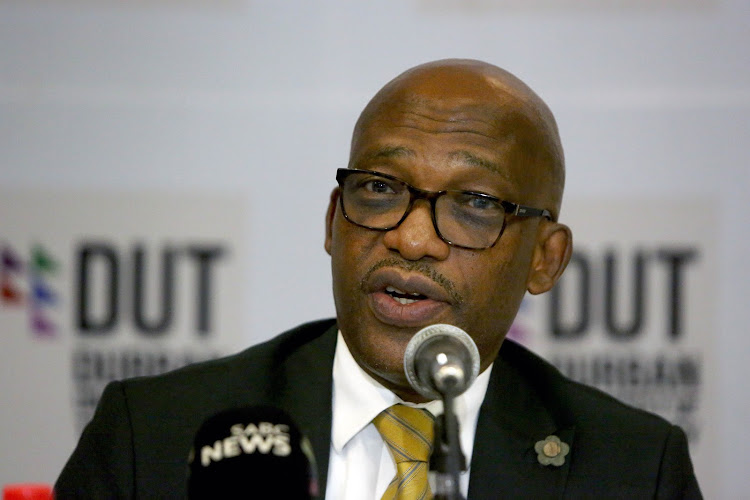 DUT vice-chancellor and principal Thandwa Mthembu during a press briefing on Friday, February 22 2019, about agreements reached with the Student Representative Council (SRC) and the resumption of the academic programme.
Image: THULI DLAMINI

The trouble-ridden Durban University of Technology (DUT), which has been plagued by protests and disruptions in the past month, has found common ground with the Economic Freedom Fighters’ Student Command-led Student Representative Council (SRC).

In a joint statement and briefing on Friday morning, the two parties announced that they had reached common ground on a number of issues at the heart of the disputes, including the matter of students who were blocked from registering, accommodation grievances, the resumption of the academic programme and a court interdict to prevent students from protesting on or near the campuses.

During the briefing at the Ritson Road campus, DUT vice-chancellor and principal Thandwa Mthembu said a management team met with the SRC, as well as representatives of the National Student Financial Aid Scheme (NSFAS), on Wednesday to discuss progress on the funding of 1,443 students who were blocked from registering. He said to date, 683 students had been unblocked and there was an undertaking that the DUT and NSFAS would work on resolving a further 419 cases. The remainder, who had performed poorly, would have to sign acknowledgements of debt.

DUT Vice-Chancellor and Principal Thandwa Mthembu during a press briefing on the latest developments within the University, including an update on the status of the academic programme. ⁦@TimesLIVE⁩ pic.twitter.com/kvzKB1Cyr5

He said the university would close down the Hertine and Baltimore residences, following student protests about these establishments, and would be inviting new service providers to tender for the provision of beds. This process, he said, would be completed by the end of March.

Mthembu said the SRC agreed that classes should resume on Monday, with the provision that students who are awaiting appeal decisions and currently staying at the Baltimore residence should be temporarily allocated to the old/existing residences pending this process.

He said the university explained that it had sought a court interdict on Thursday to ban students from protesting near its  five Durban campuses to “protect the rights of others who may not want to participate in protests”. He said the SRC retained its rights to function and had a right to appeal the interim interdict.

Rapper AKA has donated R100,000 to the Wits University 2SRC humanitarian fund in solidarity with the students following recent protests. Hundreds ...
News
2 years ago
Next Article