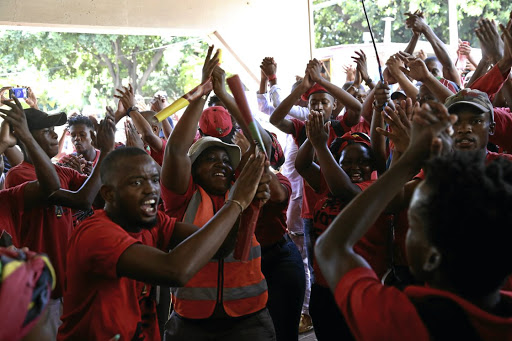 The EFF student command at the Durban University of Technology (DUT) has once again called for the removal of the current campus security company.

This is one of the student body's demands listed in a memorandum it intends delivering to the vice-chancellor on Monday.

In February‚ clashes between Excellent Security Service and student command members resulted in the death of 20-year-old Mlungisi Madonsela‚ who was shot during a scuffle between the two outside the university's Steve Biko campus.

In June‚ the National Prosecuting Authority (NPA) declined to prosecute.

SRC treasurer Musa Mbonambi said a number of other issues would be raised‚ including those related to housing.

“Students are facing a lot of issues with registration and residences‚ and we will be marching to the VC’s office to hand over our memorandum‚” said Mbonambi.

About 200 students have gathered at Cane Growers' Hall on the university's M L Sultan campus ahead of the march.

The EFF has called on President Cyril Ramaphosa to take a leave of absence following public protector Busisiwe Mkhwebane's findings against him.
News
2 years ago

'It's not about Indians' - Julius Malema denies racism allegations

EFF leader Julius Malema has rejected an accusation that his party is racist towards South Africans of Indian origin, and that its pursuit of public ...
News
2 years ago
Next Article