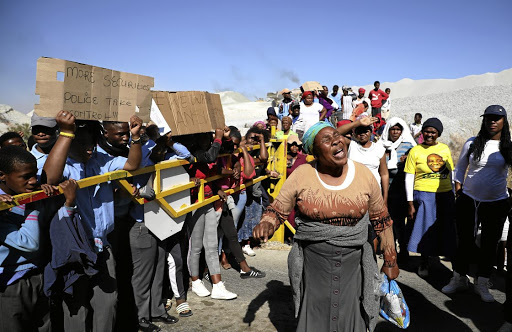 Pupils and parents from Carletonville marched to Harmony Kusasalethu Gold Plant Mine yesterday, demanding that crime be dealt with in the area. /SANDILE NDLOVU

Fed-up pupils of Wedela Technical High School in Carletonville, West Rand, yesterday prevented learning from taking place and barricaded roads as they protested against zama-zamas who have been terrorising their school and stealing learning material.

This comes after a group of zama-zamas allegedly walked out of the school with an electricity cable used to feed the entire school in the presence of police officers.

According to residents, a group of about 10 zama-zamas dared the police in the area to stop them if they could, before casually strolling out of the school on Sunday.

Mondeli Ntsele, a parent of one of the learners, told Sowetan teaching at the school has been disrupted on numerous occasions due to theft of learning material, including computers and tools from the technical workshop.

A road in Roodepoort, west of Johannesburg, has been closed after it was destroyed by illegal miners, known as zama-zamas.
News
2 years ago

"Our children are fed up with what has been happening at this school. This is the third time these zama-zamas have broken into our school," Ntsele said.

Learners and residents of the township marched to Harmony Kusasalethu Gold Plant Mine, where they delivered a memorandum of demands and blamed the mine for allowing criminality to seep into their community.

Sinawe Mbiko, a resident in the area, alleged that zama-
zamas operate freely in the mine and ran rampant in the community.

"The mine needs to ensure that the school is protected because it's our children who suffer. These zama-zamas operate in the mine, then they come and break into the school.

"The police are also scared of them because they are heavily armed," Mbiko said.

Police seized tons of illegal mining equipment when they pounced on zama-zamas who disguised hundreds of "workshops" as residential shacks.
News
2 years ago

Over the course of the past two months, three break-ins have been committed at the school.

Police spokesperson Sgt Reginald Moshe confirmed yesterday that a case of business robbery is being investigated and that no arrests have been made.

He denied that police officers who were called to the scene on Sunday allowed the culprits to walk off with the stolen goods.

"It is not true that that's what happened, however, we have launched an investigation to get to the bottom of the claims," Moshe said.

Department of education spokesperson Steve Mabona, said they were working with the police and the community to address the issues.

"We want to address this unfortunate action of the zama- zamas who are so daring that they also threaten to shoot the police," Mabona said.

Sihle Maake, Harmony Gold mine spokesperson, said they have set up a committee with the police and the community in a bid to curb the crime in the area.

Northern Cape premier Zamani Saul wants those responsible for the deteriorating financial state of municipalities to be held accountable regardless ...
News
2 years ago

The Hawks have welcomed the sentence meted out by the Welkom Magistrate's Court to a man who was found in possession of unwrought gold.
News
2 years ago
Next Article