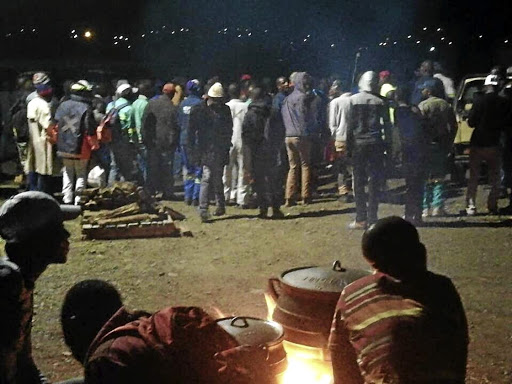 Former workers of Lily Mine camp outside the closed mine demanding jobs from the new owners.
Image: Mandla Khoza

Former employees of the closed Lily Mine and other community members have been camping outside its gate demanding that the new owners reopen the mine and hire them.

The gold mine outside Barberton in Mpumalanga was owned by Vantage Gold Fields when it was forced to shut and lay off over 1,300 employees
after a surface collapse on February 5 2016.

The sinking of the surface led to presumed deaths of three miners - Pretty Nkambule, Solomon Nyerenda and Yvonne Mnisi.

The trio were on duty when the metal container, which was used as the lamp room, was swallowed by the sinking ground.

After a relentless rescue
effort failed, the mission was abandoned due to safety and costs, according to both mine and state authorities.

Subsequent to that, the mine went under business rescue.

Now a new owner, Sikhula Sisonke Empowerment Corporation (SSC) group, claims it is being delayed from reopening the mine.

The group has accused Vantage Gold Fields of trying to hide what they have been doing wrong for years inside the mine.

15 families get houses thanks to David Mabuza’s generosity

Fifteen families in Barberton‚ Mpumamanga‚ will wake up in new houses thanks to Deputy President David Mabuza fulfilling his promise to build them ...
News
3 years ago

"As for us we were ready to start re-employing the miners and start working towards finding the bodies of the three miners who disappeared.

"But Vantage hasn't given us the share certificate with its directors... and all the documents needed when something is being sold," Arendse said.

Black-owned SSC received funding from the Industrial Development Corporation (IDC) and has paid compensation to the families of the three miners who disappeared.

"We have spent so much money on this; we believe these guys [Vantage] are trying to hide something. Remember there was an inquiry done and they were found to have done something wrong in terms of making sure that the mine is safe," Arendse said.

"We have cancelled that agreement. Actually, we gave SSC group 90 days to raise the funds needed to purchase the mine and they failed.

"We gave them eight months in total and they failed. We are in talks with a new buyer and the mine is going to be opened soon but without SSC group," McChesney.

Community members told Sowetan they would not leave the gates of Lily Mine. Their spokesperson Harry Mazibuko said: "As we speak, illegal miners are in there taking the gold. We are young and [keen to work]. But these people [mine owners] frustrate us. This is wrong, our government is setting us up."