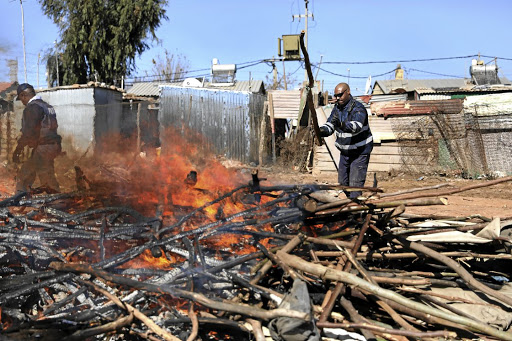 SAPS and the JMPD went on an operation to uncover and destroy illegal mining equipment near Roodepoort. / Thulani Mbele

Police seized tons of illegal mining equipment when they pounced on zama-zamas who disguised hundreds of "workshops" as residential shacks.

More than 20 law enforcement trucks that arrived empty in Matholesville, near Roodepoort on the West Rand, left fully loaded with mining equipment and structures used by the zama-zamas, as the illegal miners are known.

Inside the workshops disguised as residential shacks, police found deep holes and hundreds of buckets filled with soil containing raw gold waiting to be processed.

The makeshift structures are alleged to have been in the area for over 10 years, according to the City of Johannesburg.

Head of Johannesburg infrastructure protection unit Conel Mackay said the operation between the South African Police Service, the Johannesburg Metropolitan Police Department, forensic teams and the city was geared towards eliminating the illegal mining and illegal connections of water and electricity.

He said the operation helped the law enforcement agencies to seize illegal mining equipment, explosives and other harmful man-made tools used by the illegal miners to process the gold in the area.

While police rated the operation a success, 30-year-old Eric Maphosa, whose shack was broken into by police during the search, said police take advantage of these searches.

"I just came back from work this morning because I am a security guard and found my shack upside down with the little money I saved taken," said Maphosa.

He said he does not undermine the work the police are doing in combating illegal mining but was disappointed at the looting of innocent residents' belongings.

He said whenever police come to raid the place in search of illegal miners, "we fall victim to their stealing habits. They take our money, and valuables and you have no one to ask, especially if they don't find you home," said Maphosa.

He said he lost his work torch, watch and money amounting to R1,200 that he locked in a wardrobe for transport and food.

"I tried asking the officers I found in the yard and they said I must go to the police station because no one could come out with my belongings."

Masondo said the illegal mining was one of the biggest to be found in the area. "Police will continue these operations in all areas affected by illegal mining to make communities safer," said Masondo. He said no arrests had been made.

Death does not deter zama-zamas

Illegal miners – better known as zama -zamas – had to blast open a rock that had crushed their colleagues to death in a disused mine shaft near ...
News
3 years ago

Seven alleged zama zamas were arrested on Friday at an abandoned gold mine in Limpopo.
News
3 years ago
Next Article