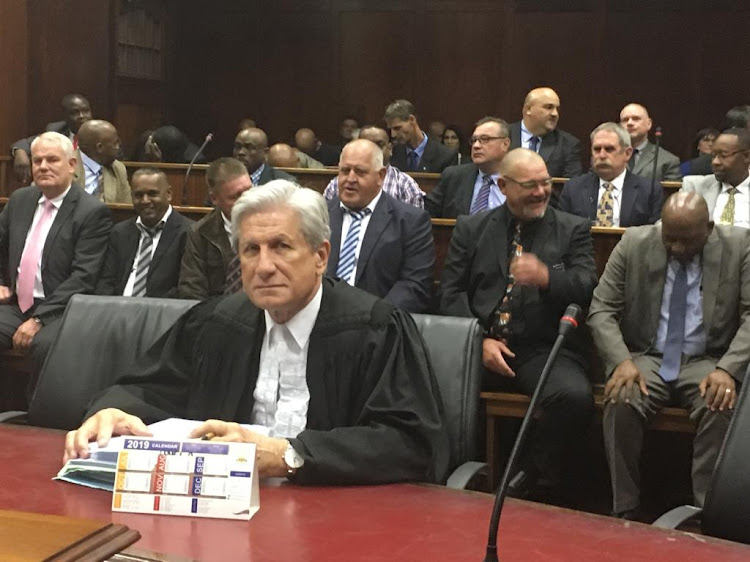 There was spontaneous applause, cheers and tears in the Durban high court on Wednesday when charges were withdrawn against the remaining 27 accused in the so-called Cato Manor "death squad" case.

The cops were arrested in 2012 on allegations that they had been running a "death squad".

However, not everyone is completely off the hook and a panel of prosecutors will assess if any of the cops can still be charged for, among other crimes, individual charges of murder and robbery.

There was spontaneous applause, cheers and tears from supporters and relatives of 27 members of the so-called Cato Manor “death squad” when charges were withdrawn against them in the Durban High court on Wednesday morning
? : @taniabroughton pic.twitter.com/qH1P1bgxTW

But the racketeering charges are gone and the indictment they were facing has been scrapped.

The charges related to the alleged extra-judicial killings of 45 people by the Durban organised crime unit, whose office was in Cato Manor. They were collectively facing 116 charges.

While three of the accused have subsequently died, all of the remaining police officers, except for those who have retired or resigned, are now back working in the police force having been cleared of any wrongdoing by internal disciplinary hearings.

Booysen has always alleged that the charges were rooted in "state capture" and were an attempt to stop investigations into allegations of corruption and fraud against senior police officials and businessmen, including Edward Zuma, the son of former president Jacob Zuma.

Edward Zuma was in business with local businessman Thoshan Panday, who was the target of a Hawks investigation probing allegations that he ripped off the police to the tune of R60m through the fraudulent procurement of accommodation for police officers for the 2010 World Cup.

The racketeering charges against Booysen were first signed off by former acting national director Nomgcobo Jiba.

This decision was set aside in the Durban high court by judge Trevor Gorvin, who said there was no evidence before Jiba to authorise the charges.

Former KZN Hawks boss Johan Booysen's fate on charges of murder, housebreaking and defeating the ends of justice now lies in the hands of acting ...
News
2 years ago

But authorisation was again given by Shaun Abrahams in 2016 and Booysen was recharged. He and the other accused were again challenging this but then, last month, Shamila Batohi, the national director of public prosecutions, said there was no case against them.

In a statement released by her media liaison officer, Batohi said she had to satisfy herself that there was validity to the authorisation. She said a panel of four prosecutors - including two directors of public prosecutions and two prosecutors with "particular expertise in racketeering prosecutions" - had agreed "a proper case was not made out on the papers presented" and the authorisations of both Jiba and Abrahams were invalid.

She said the investigation dockets relating to the remaining charges had been referred back to the acting director of public prosecutions in KZN, Elaine Zungu, "to reassess the evidence in each case, and decide whether to prosecute individuals who may be implicated in those matters".

"Where there is sufficient evidence that the actions of the police amount to criminal conduct, those responsible will be prosecuted and held accountable."