‘Something deeper at play’ in attack on Durban triathlete 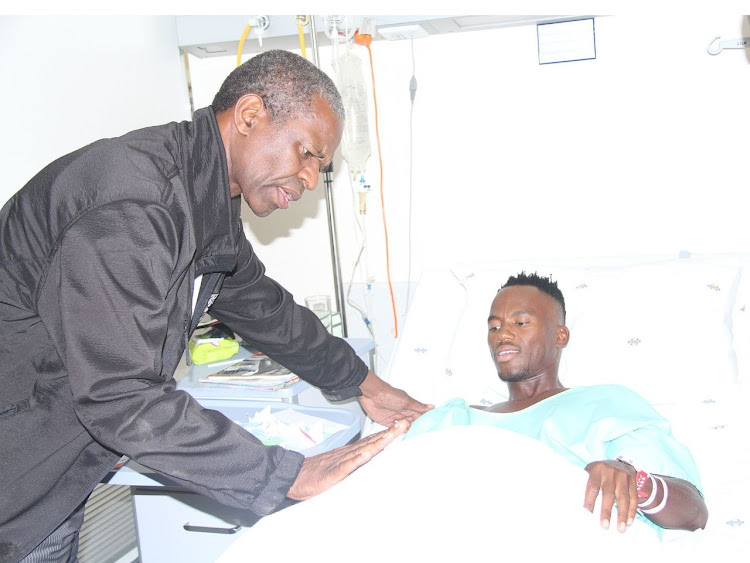 A week after the vexing attack on triathlete Mhlengi Gwala – which saw a group of men attempt to saw his legs of while he was held at gunpoint – those in his inner circle believe a deeper and more sinister motive was at play.

Gwala had been waylaid by a group of men while on a training ride near Cato Manor. The men‚ he claims‚ had forced him into a patch of roadside bush under threat of death.

The men wanted little to do with his bicycle‚ watch or cell phone and had instead set about using a hacksaw to roughly cleave at his legs.

And while the rising athletic star recovers in a Durban hospital‚ police are no closer to catching the gang that may have stopped the clock on his sporting career.

His manager‚ Dennis Jackson‚ surmised that Gwala had not been the victim of an everyday robbery.

SA triathlete Mhlengi Gwala who underwent a marathon 9 hour operation after three men tried to cut off his leg in a gory handsaw attack, is in good ...
News
3 years ago

“I don’t think this was an attempted robbery…if it was it would have played out completely differently. There is something deeper at play here‚” he said. “That is why I am so keen for the police to catch these guys so we can get some closure.”

He said that taking stock in the wake of the incident‚ the motive for the gruesome attack had played on his mind.

“It has been a week and we have had time to think about it and people have asked me about motive. Whether it was jealousy [and orchestrated by another athlete]...in my mind I doubt it‚” Jackson added.

Following the attack‚ his inner circle sprung to his financial aid‚ launching a crowd funding initiative. The initial target of R250‚000 was met within hours. International well wishers and locals have opened their hearts and wallets to the athlete‚ with the current balance just R42‚000 shy of its now R750‚000 target.

“On the face of it we took it as a robbery but after speaking to the cops things are different‚” he said. “We thought they would be looking for his bike or his watch but when we came back to the scene we found everything on the floor. No one knows why this has happened.”

Jackson said that his medical team was holding Gwala under observation.

“The doctors went and redressed his wounds yesterday and they are keeping him under observation. They expect at the end of this week he will be discharged and that is when the rehabilitation process will start‚” he said.

Fellow triathletes and donors from around the world clubbed together to help Durban sportsman Mhlengi Gwala pay for his medical bills.
News
3 years ago

Generous South Africans are starting to dig into their own pockets to help promising triathlon competitor Mhlengi Gwala pay for the medical treatment ...
News
3 years ago

South African triathlete‚ Mhlengi Gwala‚ was attacked with a chainsaw by robbers while training in Durban today‚ a friend revealed.
News
3 years ago
Next Article