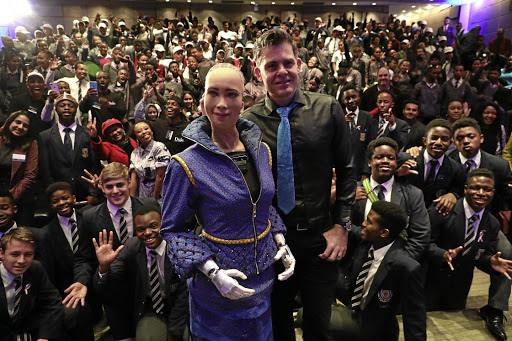 David Hanson, who created Sophia, says the robot has simulation of every major muscle in the human face which allows her to express joy, grief, curiosity and frustration among other feelings./SANDILE NDLOVU

A group of pupils from various schools in Gauteng had the opportunity of interacting with Sophia, the first humanoid robot in SA.

Sophia, who was dressed in designed African print, stood in front of a full audience at Ebony auditorium at Campus office park in Bryanston, north of Johannesburg.

From a distance, she looked like a human being.

Alicia Lawrence, 16, a grade 11 pupil at Westbury secondary school, said she was taken aback when she saw Sophia's facial expressions.

"She behaved like a normal human being. I am excited that my school was also invited to experience such an innovation.

"I have seen a lot of robots in the past, but I have never seen one that looks and act like a human being.

"There is still so much to learn about technology and I am glad I was part of this initiative. I now understand it better when people speak about 4th Industrial Revolution," she said.

Lawrence was one of the 200 pupils invited by Duke Corporate Education who attended a workshop to learn about the trends and development that indicate that machines are awakening and have impacts on our lives.

Banking with robots is the future

Would you trust a robot to give you a financial advice?
Business
3 years ago

Sophia, who was created by David Hanson, an American roboticist and founder and chief executive officer of Hanson Robotics, has simulation of every major muscle in the human face which allows her to generate expressions of joy, grief, curiosity, frustration among other feelings.

She kept looking across the room and would occasionally smile every now and then.

Hanson said he spent a lot of time in designing of Sophia.

"I investigated engineering of facial expressions, because I wanted to make a robot that acts and thinks like a human being. As we are gearing towards the 4th Industrial Revolution, people are concerned about their jobs.

Is your job safe from automation?

Are you ready for a robotic revolution?
News
4 years ago

"However, they should not be worried with robots taking their jobs, because they are not at a human level and are not generally intelligent," he said.

Hanson said robots can be used in jobs that are impossible for people.

Sharmla Chetty, the global head of Europe & Africa for Duke Corporate Education, said over the next 10 years, humanity will change and evolve more than it has in the last century.

"Every day we see new roles, new skills, and new jobs. Technology has the ability to magnify human genius, it can compensate for human limitations, but it can never replace the human touch.

"Our technology reflects our humanity and our values," Chetty said.