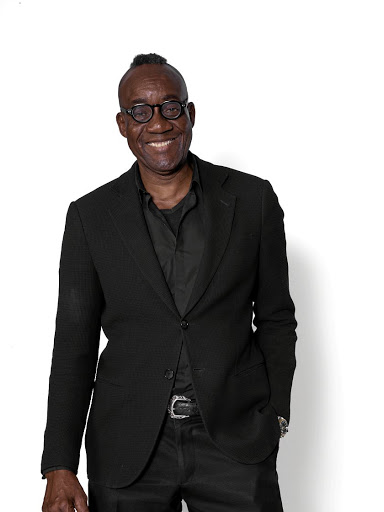 The social humanoid was developed in Hong Kong and has turned many heads for its ability to use more than 50 facial expressions in a number of high profile interviews. Sophia is also the first robot to obtain citizenship, which she received in Saudi Arabia.

“It is an absolute privilege for any designer in the world to be commissioned for a project like this,” says Eboka. “Sophia marks the beginning of the interactions between man and humanoids. This momentous moment in history cannot be underestimated. Dressing Sophia with South African-influenced design ensures South Africa and Eboka are part of history.”

The Nigerian-born designer is the brains behind the House of Eboka brand. His previous top-tier clientele include Graca Machel and the late Miriam Makeba. Eboka has also dressed SA's current first lady, Tshepo Ramaphosa.

Other than adding his signature style, Eboka wanted to create a garment that would embody what an African humanoid robot would wear.

“The only challenge was having to consider the humanoid’s lack of flexibility compared to an actual human being who has a much wider range of motion!”

Ecstatic about the opportunity to take his design house to greater heights, Eboka shares a great deal of excitement to be creating a garment for the robot.

“I do hope people will react with the same warm excitement that I feel at the chance to meet the first humanoid ever created because it shows the achievement of human beings in the fields of science and technology. I believe that we humans will eventually share this planet – and others that space travel might take us to – with artificially intelligent humanoids.”

Sophia the humanoid robot will wear the garment on July 11 at The Davos of Human Capital in Bryanston, Johannesburg. The event takes place annually and hosts dialogues that aim to make differences through leadership and showcasing best practice in the development of attendees’ respective businesses.

When it comes to entrepreneurship there are a number of complications that many face, from lack of funding and support to exposure.
SebenzaLIVE
3 years ago

If he never grew up on your screens on MNet's KTV you probably know our guest for his work on SuperSport.
SebenzaLIVE
3 years ago

Ara Emporium stitches new path with fabrics from the continent

Classic, timeless and ageless, this is what has inspired women’s clothing brand Ara Emporium.
SebenzaLIVE
3 years ago
Next Article