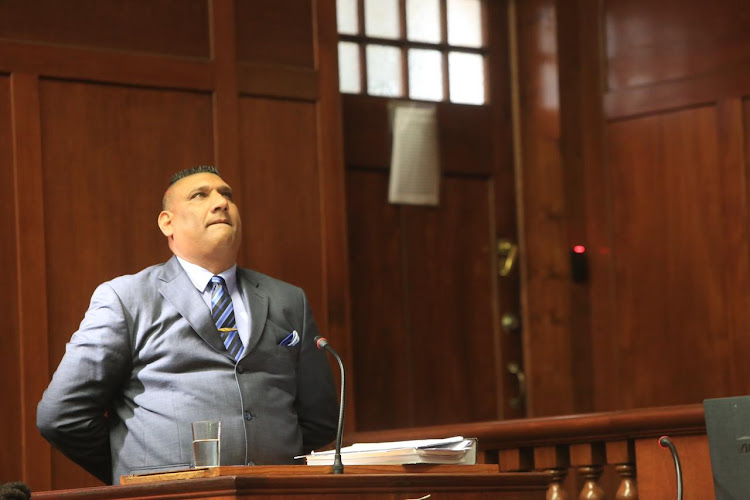 Shailendra Sukhraj, who shot his daughter Sadia while trying to rescue her from a hijacking, testifies during aggravation of sentence in the Durban High Court on Tuesday.
Image: JACKIE CLAUSEN

The raw heartbreak of Chatsworth mother Lorraine Sukhraj, whose nine-year old daughter Sadia was killed in May 2018, was felt in the Durban High Court on Tuesday as state advocate Kelvin Singh read out her victim-impact statement.

"It's just too raw still. It's too painful," Singh told a silent court as Sibonelo Mkhize, one of two armed robbers who hijacked a car belonging to the girl's father, Shailendra Sukhraj, stared straight ahead.

On Monday, Mkhize was found guilty of Sadia's murder through the doctrine of common purpose. He was also found guilty of the murder of his alleged accomplice, Siyabonga Bulose.

Mkhize, 39, was arrested after allegedly hijacking the car in which the Shallcross schoolgirl and her father Shailendra were travelling in May last year.

It's common cause that both were shot dead by Sadia's father, Shailendra, who frantically fired shots at the car as it sped away with his daughter in it.

Lorraine and husband Shailendra both wept as Singh read out the statement.

She said Sadia's room remained exactly as it was as she could not change anything.

In her statement, Lorraine said she would go into the bedroom to smell Sadia's clothes.

The morning she died, Sadia asked her if she was proud of her and she said she was so grateful that she got that opportunity to say that she was before Sadia died.

"Looking back, what a blessing that was."

She said every day she went to drop her baby off at her parents - where the hijacking happened - and she has constant flashbacks to that day.

"Sometimes I feel like I can't breath. I cry for her every day. I can see her dancing and laughing in front of the mirror. She sang beautifully and her voice filled our home."

Attached to the statement were photographs of the nine-year-old girl wearing the pink dress she wore at Christmas 2017. It was the same dress she was buried in, in May last year.

Sadia's father gave evidence on Tuesday about the impact of her death on the family.

He said the conviction had lifted a huge burden off the family.

"It doesn't bring her back but it is some consolation," he said.

He described his daughter, who was in grade 4, as a "gem".

"She was robbed of her dignity to have impact on this country in a positive way. But SA has lost a real gem."

It emerged during argument on sentence that Mkhize has a previous conviction for receiving stolen property - a motor vehicle - and in October 2013 had been sentenced to an effective five-year prison term.

His advocate, Sizwe Masondo, argued that judge Steyn should find that the fact that he had not actually shot Sadia and his accomplice should be considered substantial and compelling circumstances and Steyn should not impose a sentence of life imprisonment.

Judge Steyn, who commented that Mkhize had shown no remorse, will deliver  sentence on Wednesday.