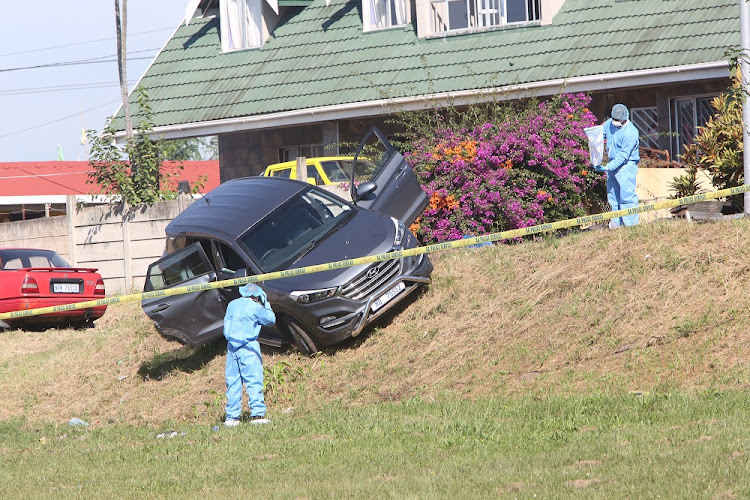 The Hyundai that was involved in a hijacking and crashed into a truck and lost control. A 9 year old girl that was in the vehicle was shot during the hijacking and died in hospital.
Image: Jackie Clausen

As the family of Sadia Sukhraj laid the 9-year-old to rest on Tuesday‚ police confirmed that an off-duty cop who witnessed the hijacking which preceded the girl’s death had been ruled out as the man who fired the fatal shot.

Sadia died from a gunshot wound sustained during the chaos on Monday. She had been with her father‚ Shailendra‚ on a school run on Monday when he was pulled from the car while in the driveway of a Shallcross home in Durban by three men‚ who then sped off with Sadia.

Between the time they had left the house and the point when they had crashed‚ someone had opened fire on the car‚ with police remaining tight-lipped on whether or not they had identified the triggerman.

The grade four pupil at Everest Primary School was buried at the Shallcross Cemetery on Tuesday after an emotional funeral attended by thousands of mourners.

Independent Police Investigative Directorate spokesman Moses Dlamini confirmed that the shooting incident‚ in which Sukhraj was wounded‚ happened long before police had arrived at the scene.

The directorate is charged with the investigation of any death as a result of police action.

Candles and prayers for 9-year-old slain in Durban hijacking

Grief-stricken residents of Chatsworth‚ in the south of Durban‚ lit candles and said prayers as they held a night vigil following the death of ...
News
3 years ago

“The information we have is that the off-duty police officer witnessed the attempted hijacking but‚ at this stage‚ it has been established that the police officer had not been involved‚” he said.

“We are not‚ at this juncture‚ involved in this investigation. What we have at our disposal now suggests the officer was not involved in the shooting.”

His statement reveals that whoever fired the shots at the car was not a police officer.

One of the hijackers died at the scene‚ one was arrested and third remains at large.

The death of Sukhraj rocked the Shallcross community‚ prompting protest action outside the Chatsworth police station on Monday night.

The crowd included pockets of drunk and disorderly demonstrators‚ according to police.

In a statement‚ police said that the night before the funeral‚ members of the nearly 1‚000-strong crowd had hurled objects at cops and attempted to force their way into the station. Twenty people arrested on charges of public violence are expected to appear in the Chatsworth Magistrate’s Court on Wednesday.

SAPS spokesman Brigadier Jay Naicker said that the mob had demanded that police hand over a man believed to have played a role in the hijacking.

“The group demanded that police hand over the arrested suspect to them so that they can deal with him through mob justice. Police were compelled to use minimum force to disperse the group as they posed a threat to members of the community and police officers.

The haunting strains of a bagpipe heralded the arrival of a tiny white coffin bearing the body of slain 9-year-old Sadia Sukhraj at the Christian ...
News
3 years ago

“One thousand members of the community‚ some of them drunk and disorderly‚ descended on the police station. They burnt tyres‚ obstructed the road and hurled objects towards the police station while they attempted to force the gates open‚” he said.

“We wish to convey our sincere condolences to the family of Sadia Sukhraj. It is sad that certain individuals are diverting attention away from what occurred yesterday when they should be consoling and supporting the family during this tragic time.

“We are comforted by the fact that we have an active Community Policing Forum at Chatsworth who do not support the illegal activities that were witnessed yesterday‚” he said.

The 39-year-old man arrested by an off-duty police officer moments after the hijackers crashed on Monday will also appear in court on Wednesday.

A funeral service was held for 9-year-old Sadia Sukhraj in Durban on May 29 2018. Sukhraj was killed during a botched hijacking on May 28 2018.