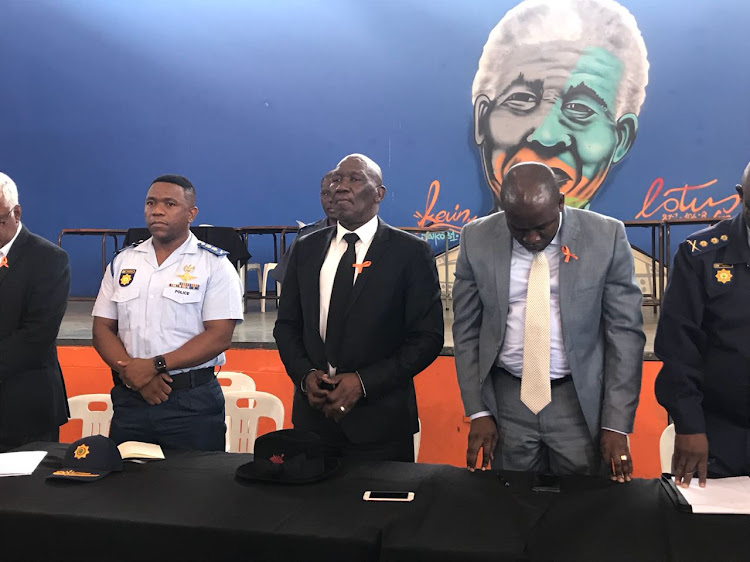 Police Minister Bheki Cele told the family of the slain 9-year-old who died in a hijacking incident in Chatsworth that he shared their pain.
Image: JEFF WICKS

Police Minister Bheki Cele says investigators have identified a third man alleged to have played a role in the hijacking which resulted in the death of Sadia Sukhraj‚ 9‚ on Monday.

During the pursuit she was shot‚ and later died in hospital.

A suspected hijacker died at the scene and another was arrested.

“Out of three [suspects] we are chasing one now. We have identified the criminal and we just need to go pick him up‚” Cele said‚ speaking in Shallcross on Thursday.

“We came to see this family after meeting with the police [in Chatsworth] to hear about this incident‚” he said.

“We share the pain of this family and for us it is difficult for us to comprehend how they have been hurt.”

The haunting strains of a bagpipe heralded the arrival of a tiny white coffin bearing the body of slain 9-year-old Sadia Sukhraj at the Christian ...
News
3 years ago

Cele’s visit followed the court appearance of 39-year-old Sibonelo Mkhize‚ who on Thursday abandoned his bid for bail in the Durban Magistrate’s court.

“The one we have arrested is a man who should be in prison by the look of things‚ I don’t know how people like him get parole‚” Cele said.

"The one that was arrested will stay inside and it helps us‚ because if we let him out…This guy has been profiled and he has a string of cases‚ carjacking and attempted murder. I am told he was sentenced to seven years in 2013.

"The one that is dead has also got a long list of criminal activity‚ and so does the third one. We know him and we know where he stays."

As the family of Sadia Sukhraj laid the 9-year-old to rest on Tuesday‚ police confirmed that an off-duty cop who witnessed the hijacking which ...
News
3 years ago

A 9-year-old girl was shot in an apparent botched car hijacking in Chatsworth on Monday morning.
News
3 years ago

The child has succumbed to a gunshot wound in the stomach at Chatsmed Hospital‚ south of Durban.
News
3 years ago
Next Article