3 villagers brave protesters to cast their vote in North West 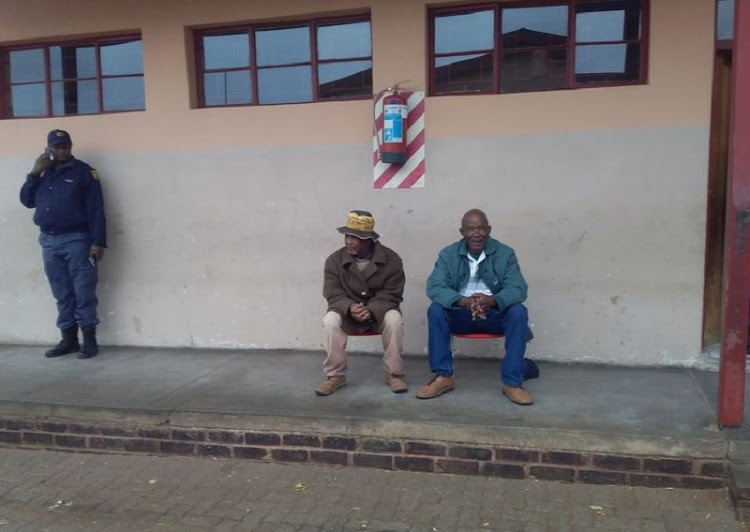 The first 2 people in Madinonyane village queuing to cast their votes irrespective of villagers boycotting the elections.
Image: Boitumelo Tshehle

Madinonyane residents in Ganyesa in the North West have barricaded the roads going into the village with tree branches and stones, saying they will not vote.

The residents are angry that the government allocated money to build a road but the road was never completed.

On Wednesday morning, IEC staff members had to be escorted to the voting station by the police but only three people had gone to cast their votes by 12pm.

Some residents said they wished to vote but were forced to support the protesting residents because the unbearable bad condition of their road was also concerning them.

Residents said that in 2015, the government allocated R264m to build a 55km  road from Ganyesa to Madinonyane.

Resident Davis Moreetsi,66, who was the first person to cast his vote, said motorists have to travel for 16km on a bad bumpy gravel road that also has deep holes.

The gravel road runs from Vragas village to Madinonyane. “We want to know what happened to the rest of the money," Moreetsi said. “They constructed half of the road and left  another part without any explanation.”

Moreetsi said even though he decided to go against the villagers' wish for every resident not to vote, he was in support of the strike.

“They have a valid reason for protesting. We need a road in this village but it is within my right to cast my vote,” he said.

Various communities took to the streets early on Wednesday morning to protest against participating in the elections.
News
2 years ago

Residents in this village travel for 125km to get to the nearest town of Vryburg.

Residents said they were still feeling oppressed by the new government 25 years after democracy.

They were removed from their farms by the apartheid government in 1966 and dumped in Madinonyane where they resettled.

Kamogelo Mathope ,66, said he was not interested in voting because he did not see much of a difference since 1994.

“I form part of the Struggle that fought the apartheid government. I slept inside the pipes and in the bushes fighting for blacks to be free.

“But I feel like I was a slave then and I am still a slave now. We do not have a proper road. This is painful,” he said.

Another resident who managed to vote tiptoed into the voting station, saying she had to lie the entire journey there telling suspicious protesters that she was actually going to a funeral.

“They burnt a car, they can also burn me. My wish was to vote so that I can have a better life and receive basic services. Not voting is going to make our situation worse,” she said.