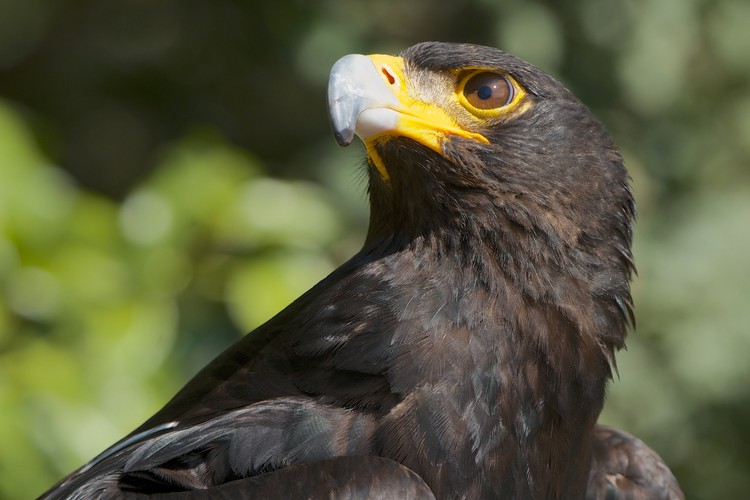 Verreaux’s eagle, also known as the black eagle, is at the centre of a dispute over a wind farm that the Watson family wants to build near Uitenhage.
Image: Arturo de Frias Marques via Wikipedia

The department of Environmental Affairs has given the go-ahead to a wind farm project that the Watson family wants to build in the Eastern Cape, before assessing strong differences of opinion from scientists worried about the threat to bird life.

The topic came up at the Zondo commission of inquiry into state capture when evidence leader Paul Pretorius SC was questioning Angelo Agrizzi. Agrizzi is the former chief operating officer of the Bosasa group of companies controlled by Gavin Watson, eldest of the four Watson brothers.

The Watsons' Inyanda-Roodeplaat wind farm project, high in the Groot Winterhoek mountains near Uitenhage, has received environmental approval from the national department of environmental affairs (DEA). However, several appeals have been lodged.

Legally, it is environment minister Nomvula Mokonyane who must adjudicate these appeals, but testimony at the Zondo commission has linked her to massive bribes in the form of cash, goods and services from Bosasa – and hence a huge possible conflict of interest.

Pretorius asked Agrizzi about the farms where the wind farm is planned and for confirmation that they are surrounded by the Groendal nature reserve.

Agrizzi: Correct. It is known for the black eagles or I think the eagles that are in that area.

Pretorius: Yes, and we know that wind farms and bird life, particularly eagles, do not get on very well with one another?

Pretorius: So the establishment of a wind farm on this property is an environmentally sensitive issue?

Their discussion was short, but it has a substantial back story.

From the outset, the birdlife at the proposed Inyanda-Roodeplaat wind farm site was flagged as an issue of major environmental concern. So last year's decision by the DEA to grant environmental approval for the project may have been as much of a surprise to some officials in the department as it was to many of the objectors.

This is because, when the decision was announced, these officials were still arranging an independent review of two studies into the impact of the wind farm on endangered and threatened bird species resident in the area. These species include black harrier, Verreaux's eagle (black eagle) and martial eagle.

The first was conducted by SA ornithologist Jon Smallie between 2012–2014. He had been hired as an avian expert to undertake pre-construction monitoring and data collection, ahead of the statutory environmental impact assessment (EIA) process that the development had triggered because of its size and potential impact.

Smallie found that the wind farm proposal posed an unacceptably high risk to raptors like eagles and other bird species, and he recommended that the project should not be approved.

The threat to the birds constituted, he believed, what environmental practitioners call "fatal flaws" or, more colloquially, "show stoppers" in development applications.

Not surprisingly, Smallie’s report did not find favour with the wind farm developers: Inyanda Energy Projects (Pty) Ltd, a company established in July 2012 that has four members of the Watson family as its directors – Ronald (Ronnie) and Valence Watson, two of Gavin’s three younger brothers; Ronnie’s daughter Tandy Snead; and Valence’s son Jared.

Ronnie is also the owner of the farms where the project is planned.

On the advice of their lawyers, Inyanda then appointed a British bird consultant, Dr Steve Percival, to review Smallie's report. According to his CV, Percival has worked on many wind farm projects around the world – including another highly controversial South African wind farm, Witberg near Laingsburg.

But Percival’s 2015 "review" turned into a second specialist study that Inyanda presented as part of the statutory EIA process. His conclusion was that although the wind farm would have negative impacts on large raptor species like the Verreaux’s Eagle that were at risk from collisions with the turbine blades and other factors, these could be reduced to acceptable levels through his proposed mitigation measures.

Environmental Affairs minister Nomvula Mokonyane may once again prove herself useful to the controversial Watson family.
News
2 years ago

His major finding, therefore, was that there would be no serious impact on avifauna (bird life).

Although he defended these findings vigorously, Percival’s work was strongly criticised by, among others, conservation organisation BirdLife SA and ornithologist Dr Alan Lee, editor-in-chief of Ostrich: Journal of African Ornithology and a research associate of UCT's Percy FitzPatrick Institute of African Ornithology.

The "completely different results" of the two studies by Smallie and Percival was one of a number of reasons why, on February 20 2017, the DEA refused to accept the first environmental impact report for the project that had been submitted in November 2016.

The DEA said amendments were required before the EIA would be reconsidered. It listed other problems too: an allegedly illegal road constructed and/or upgraded on the site; the preferred layout and the number of turbines; the status of other species of conservation concern on the property; the route of power lines from the facility; the status of bats; water sources; and the socio-economic impacts of the project on surrounding properties.

Parliament has officially handed over the evidence it gathered during its inquiry into the alleged capture of Eskom by the Guptas to the judicial ...
News
3 years ago

The DEA's rejection letter stated: “… this department requests that the Applicant appoint an independent avifaunal specialist to externally peer review all work undertaken by the two avifaunal specialists and make final conclusions and recommendations on the avifaunal impacts".

However, Inyanda’s attorneys told their client that it was not a legal requirement for them to appoint the independent reviewer requested by DEA, and so the company refused to comply. On June 9 2017, their environmental consultants submitted an amended EIA application to DEA, still citing Percival’s recommendations.

Caught between the mutually exclusive recommendations about birds, the department decided to conduct its own avifauna review, and in mid-February 2018 contracted Cape Town-based consultant Dr Andrew Jenkins to do the work. His terms of reference included "a thorough peer review of two different avifaunal specialist studies" and to "provide guidance" on whether DEA should grant or refuse environmental authority for the project, with reasons and recommendations.

On February 21 the department told Dr Jenkins that all the contract documentation had been received and that it would let him know when a project initiation meeting could be held.

But then everything went quiet, and for a couple of months Jenkins heard nothing. Eventually he learnt from an outside source in mid-April that the DEA had issued environmental approval for the wind farm. This had been recorded in a letter dated April 5 2018, signed by Sabelo Malaza, chief director: integrated environmental authorisations.

Former Bosasa chief financial officer Andries van Tonder has detailed how the company crooked its books to derail investigations by the South African ...
News
2 years ago

Asked by GroundUp for an explanation, DEA spokesman Albi Modise confirmed that the department's team had decided that there was a need for an external review of the avifaunal assessment and had started with the procurement process to appoint an expert.

"However, due to further delays with the procurement of specialists to undertake the review and additional financial implications to the department, it was decided that a decision must be made with the available information," Modise said.

But environmentalists close to the project say conversations with officials suggest that pressure from either top-ranking DEA officials and/or political players was brought to bear for a decision to approve the EIA. The DEA minister at the time was the late Edna Molewa.

There are other worrying aspects for bird life.

Researchers monitoring the Verreaux’s Eagle population at Roodeplaat ahead of the EIA process noticed that three nests appeared to have been deliberately set alight and burnt, as the fire was completely localised. However, there was never any proof about this suspicion.

More worryingly, there is hearsay evidence – not independently confirmed by GroundUp – that the eagles at Roodeplaat were deliberately targeted for illegal removal.

A former employee of Bosasa who asked not to be named out of fear for the Watsons – "They are quite an aggressive family," he said – told GroundUp that he had started work with the company in 2015 and had attended early morning prayer sessions hosted by chief executive Gavin Watson.

During these daily prayer sessions – the ex-employee thought they had been around late 2015 or early 2016 but was unable to recall exact dates – Gavin Watson had on "numerous occasions" mentioned the Roodeplaat wind farm project and the eagles. Watson had told those present – usually between five and 10, but sometimes as many as 15 employees – that his brother had an "environmental problem" with the presence of the eagles at Roodeplaat, and that he [Ronnie Watson] "would book someone to come and shoot these birds".

Gavin Watson would also tell them about how his brother had built a road up the mountain to the wind farm site "with his own two hands", the former employee said.

"I heard it on numerous occasions … [Gavin Watson] didn't make it a secret to the people sitting in that room."

A second person, who is still employed by the company (now renamed African Global Operations) and asked not to be named, also attended these prayer meetings and confirmed the accuracy of the first witness's recollections.

Former SABC COO Hlaudi Motsoeneng on Thursday confirmed he has a "confidential agreement" with African Global Group (Bosasa), but when asked about it ...
News
2 years ago

"Gavin almost bragged about it - 'Ronnie hired someone to come and shoot the birds'. Apparently he [Ronnie] had some difficulty in getting it [the wind farm] signed off," this person said.

If these reports are correct, the alleged shooting would probably have taken place during 2015.

A document called the Final Addendum Environmental Impact Report – the basis for the wind farm's environmental approval by the department of environmental affairs – includes a statement which records a marked impact of some sort on the birds during the 2015 period: "Breeding Verreaux’s Eagle were active in most of the known ranges around the wind farm site, but all of these birds failed to breed successfully in 2015 (though they had bred successfully at many of these sites in 2013 and 2014, and several did so again in 2016)," it says.

Mokonyane has denied that the Zondo commission testimony constitutes a conflict of interest for her in adjudicating the wind farm appeals, but she has not given any indication of when she intends to do so. At least one of the appellants says they will launch an immediate high court review action should she approve the project.

Ronnie Watson and Inyanda Energy Projects (Pty) Ltd have been asked to comment via their attorneys. At the time of going to press, no response had been received.

GroundUp attempted to contact Gavin Watson by e-mail with a request to comment, but has not received an answer.