A woman has been charged with attempted murder after she allegedly doused her husband with boiling water after she accused him of cheating.

Ishmael Radebe, 48, suffered third-degree burns on his genitals after his wife allegedly poured boiling water over him while he was sleeping in their home in Benoni, east of Johannesburg, two weeks ago.

Radebe was hospitalised after the attack.

Police spokesperson captain Justice Ramaube told Sowetan that Radebe opened a case and his wife was immediately arrested at their home.

"He was so badly burnt that his private parts had shrunk and the skin around his genitals was peeling off.

"We have opened an attempted murder case after getting a medical report on the man's condition in hospital." 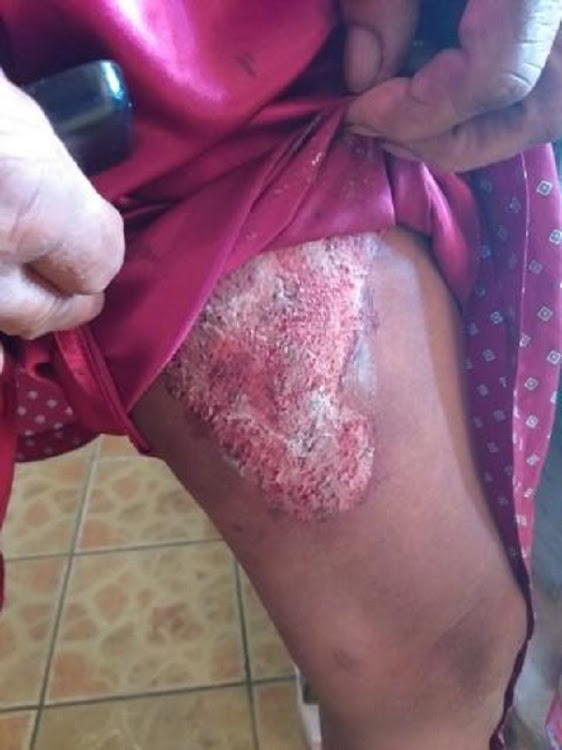 The inside of Ishmael Radebe's thigh where his burn wound is partially visible.
Image: Supplied

Speaking from his hospital bed, Radebe said his wife had accused him of cheating on her.

He said that his wife had been fine before he went to sleep and he didn't think that she could do that to him.

Radebe said he and his wife have been living together with their children for over 24 years.

"Maybe she doesn't want me any more ... I am out of words right now because I feel devastated and powerless," he said.

"I am badly burnt and I have been in and out of hospital for the past week and the pain I have suffered and emotional distress is unexplainable."

Ramaube said the woman appeared in the Benoni regional court on Monday.