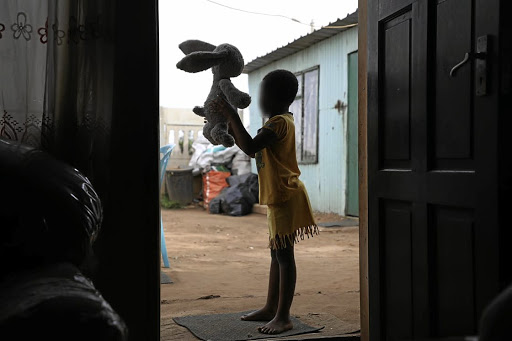 The seven-year-old girl who spotted her attacker on the street in Daveyton./ THULANI MBELE

More than a year after she was sexually assaulted, a seven-year-old girl pointed out her alleged abuser while walking to church with her mother.

The little girl from Mayfield in Daveyton, Ekurhuleni, was only six years old when a 44- year-old man, now in police custody for sexual assault, allegedly abused her.

She had allegedly also told her father about her ordeal a week earlier when she spotted the man for the first time but no action was taken.

According to police, the girl spotted the alleged abuser for the second time while walking to church with her mother and opened up about how he had called her while playing with her friend and sexually assaulted her in a toilet.

The girl's 43-year-old mother told Sowetan how her daughter froze upon seeing the man she referred to as "mkhulu" (grandfather) before she told her of the sexual assault.

"She said 'mummy, that man with a purple cap raped me'," the devastated mother said.

"I stopped and asked her what is rape. She replied and said 'rape is when a man forces a little girl to undress, opens his zipper and puts his thing on you'."

The mother said she then realised that the man was a relative of her daughter's friend.

Two life sentences‚ plus 10 years in prison.
News
3 years ago

The mother said her daughter was playing at the friend's home when the incident happened. She said her daughter told her that as they were playing in the house the man came and ordered her friend to go and look for sugar because he wanted to make tea.

"My daughter then told me that Mkhulu then called her outside and took her to the toilet where he took off her panties, pulled up her dress and lay her on the toilet floor," said the mother.

"She also said he then covered her mouth with his hand and told her not to make a noise."

The mother said her daughter told her in graphic detail how the man had penetrated her until she cried from pain.

Police spokesperson Constable Justice Ramaube confirmed a 44-year-old man was arrested on Sunday evening after the mother called the police. Ramaube said the suspect had been out of Gauteng for nearly a year following the girl's alleged sexual assault.