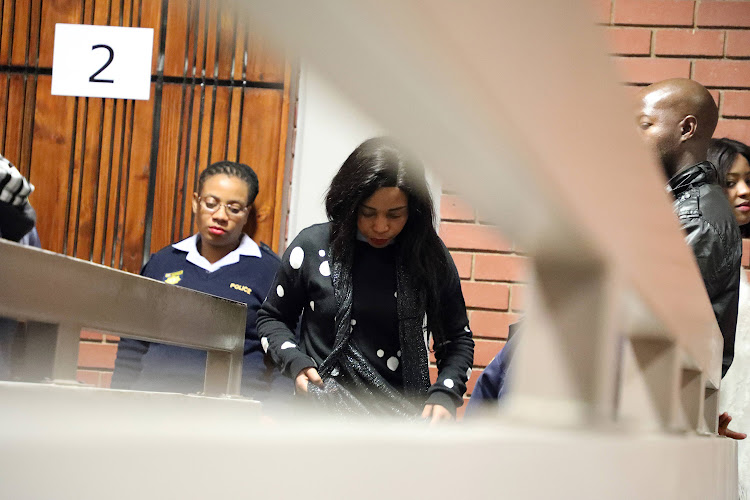 Malibyane Maoeng is facing charges of fraud and being in possession of a stolen vehicle after she allegedly went on a shopping spree with Dire's credit card, buying furniture worth R21000 and making cash withdrawals to the tune of R5000.
Image: Thulani Mbele

The women who was last seen with the doctor found dead in a lodge is expected to appear in the Benoni magistrate's court on Thursday. Malibyane Maoeng, 26, is facing charges of possession of a stolen vehicle, theft and fraud.

This comes after Maoeng was arrested on June 12 at her rented apartment at Blue Lakes Estate in Benoni where she was found hiding in the base of her bed in her bedroom after being on the run from the police for more than a month.

She  allegedly fled  the scene of the late 61-year-old Doctor Sankubele Dire's death in his white Mercedes Benz. She then lent it to  her ex- boyfriend ,who was later arrested while taking it for a spin.

Maoeng  is also facing fraud charges after she allegedly went on a shopping spree using the medic's credit card and  purchased furniture amounting to R20 000 as well as a cash withdrawal of R5 000.The Dire family suspect that the doctor was poisoned after he was found dead at the lodge in Sasolburg with froth coming out his mouth

The family of a third deceased man linked to the woman dubbed “the black widow” has asked police to probe his mysterious death.
News
3 years ago

The woman who allegedly went on a shopping spree with the credit card of Dr Godfrey Dire will also face fraud and theft charges.
News
4 years ago

The formal bail application of Malibyane Maoeng, who is facing charges of fraud and being in possession of a stolen vehicle, was postponed for Monday ...
News
4 years ago
Next Article