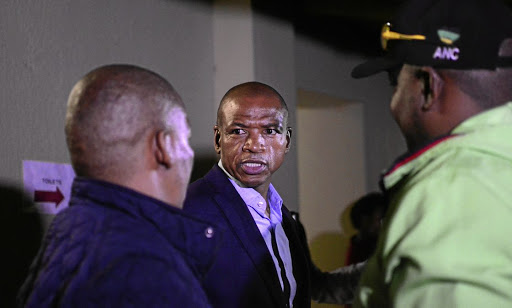 Lieutenants of former North West premier Supra Mahumapelo have launched a fightback in an effort to have him and the disbanded ANC provincial executive committee (PEC) reinstated.

In August, the ANC's NEC disbanded Mahumapelo's PEC following a recommendation from the party's national working committee and replaced them with a provincial task team.

In an urgent application filed at the South Gauteng High Court yesterday, four former NW PEC and current branch members - Aaron Motswana, Mmamonyenyane Maleke, Kutlwano Masibi, and Grayn Nicholas Jood - have pleaded with the court to set aside the appointment of the provincial task team (PTT) and declare it illegal.

They have requested the court to immediately interdict the PTT from carrying out duties pending their application's outcome and to reinstate the disbanded PEC led by Mahumapelo.

In his founding affidavit, Motswana denied that their PEC was not operating in line with the party's vision for the 2019 national elections and argued that talk of factions arose prior to the ANC's national elective conference

"It was only in the build-up to the 2017 national conference that the ANC in all provinces, not just the North West, experienced divisions within the party as part of the national leadership race.

"The NW was not immune to the mood of factionalism that had gripped the organisation," Motswana stated in the court papers.

Earlier this month, The Sunday Times published an article and picture in which it said former president Jacob Zuma met with, in what was described as a clandestine meeting, among others, ANC secretary-general Ace Magashule, Mahumapelo, ANC Women's League secretary Meokgo Mtuba and ANC Youth League KZN secretary Thanduxolo Sabelo at a hotel in Durban. The meeting was believed to have discussed a fightback strategy that involved launching court action to challenge the outcome of last year's ANC national conference and the disbandment of the North West PEC.

Motswana, the mayor of Mamusa local municipality near Vryburg, cited the party's constitution's section 12.2.4 in which it states that it vests the NEC with the power to dissolve the PEC. It imposes a duty on the NEC to ensure that the provincial, regional, and branch structures of the ANC and its leagues function democratically and effectively.

He reiterated that the decision to disband the PEC was unlawful in that the branches and regions were not properly consulted and that the party's constitution permits the dissolution of a PEC as a matter of necessity.

Motswana, who spoke to the Sowetan yesterday, said: "We do not want to divulge information pertaining to our application because the matter is now before the courts and we have requested for it to be set for October 23."

SACP's Blade Nzimande on Tuesday called on the tripartite alliance to discuss allegations of a plot against President Cyril Ramaphosa.
News
3 years ago
Next Article