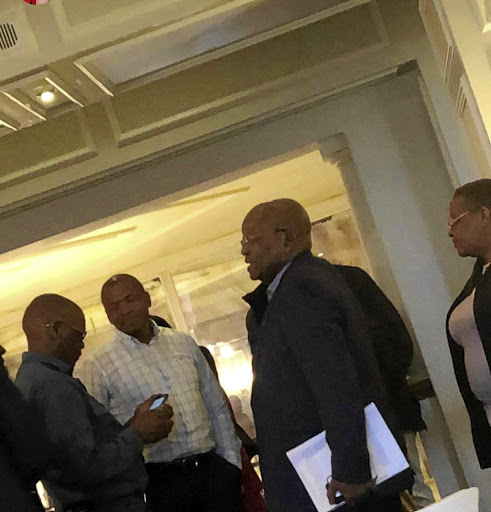 While Luthuli House last night issued a strong statement rubbishing a Sunday Times report that the three - and others - held a meeting to pilot president Cyril Ramaphosa's removal, ANC chief whip Jackson Mthembu called on the party to investigate the claims.

The meeting was said to be about a strategy to "challenge the outcome of last year's ANC national conference" which saw Ramaphosa elected ANC president.

The move comes at a time when Ramaphosa is attempting to crack down on corruption and state capture - and the officials involved.

Head of the ANC presidency Zizi Kodwa said: "The ANC has noted the media reports of an alleged plot to unseat president Ramaphosa.

"The ANC has further noted that persons mentioned in the report have denied to have been part of any secret meeting," Kodwa said.

On Sunday evening, the ruling party issued a statement rubbishing the report.

"The ANC will not dignify these blatant lies and fabrications with a detailed response.

"It is clear that this malicious gossip is calculated to cast aspersions on the integrity and commitment of our secretary-general, to the unity and renewal project of the African National Congress," ANC spokesman Pule Mabe said.

Without a recording of the meeting we may never fully know what transpired at Maharani Hotel last week.
Opinion
3 years ago

Mthembu tweeted: "More seriously disturbing in the alleged clandestine plot, is the undermining of our state in efforts to fight and reverse impacts of state capture.

"Those involved in this plot also want to undermine the ANC 2019 election campaign so as to produce disastrous results."

In August, the ANC NEC disbanded the provincial executive committee (PEC) of the North West, which saw Mahumapelo, a Zuma strongman ousted from his position, following calls by some members to Ramaphosa to dissolve the provincial structure.

However, four regions have threatened to head to court to challenge this decision.

The disgruntled regions - Ngaka Modiri Molema, Bojanala, Dr Kenneth Kaunda, and Dr Ruth Segomotsi Mompati - wrote a letter to Magashule last week in a bid to revoke the decision taken by the NEC to dissolve the PEC last month.

In a strongly-worded letter, the four regions argue that the decision to dissolve the PEC was "unlawful".

The National Working Committee (NWC) and the party's top brass were on a two-day visit to the province and held meetings with branch and regional structures to discuss the political turmoil within the structures.