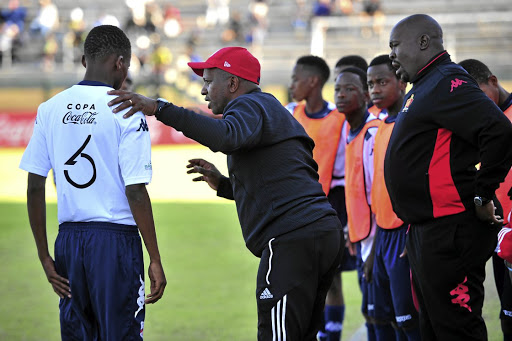 Sundowns academy coach Isaac Shai speaks to his players as they begin the defence of their Copa Coca-Cola title this weekend.
Image: Samuel Shivambu/BackpagePix

Mamelodi Sundowns legend and academy coach Isaac Shai believes it won't be long before they produce the next Percy Tau.

Shai coached Tau at under-15 level at the club's academy which is housed at Clapham High School in Pretoria.

Tau went on to become the most expensive player in SA history following his R50m-plus move to English Premiership club Brighton & Hove Albion.

Clapham are currently competing to defend their Copa Coca-Cola title taking place in Kwazakhele in Port Elizabeth. The tournament kicked off yesterday.

"At the moment we have a good group of players who are very talented and there is potential for one or two to follow in the footsteps of Percy," Shai said.

"But I also think that they can make their own history and make their own names. Football has shown us that it is a career that can take you places so Percy going overseas has opened the players' eyes and made them be able to dream."

There are nine teams taking part in the competition with each province represented. Clapham are one of the favourites to lift the title but they face tough competition from Durban's Glenwood High School.

Playing in their home province, Malcomess High wanted to make an impression in front of their supporters. Their coach, Tieho Rantho, said his team was confident of beating the odds against the best schools in the country.

"I find these players from our area in Aliwal North and I can say that there is a lot of talent in our region. There is a bit of pressure on us as we are the home team but I have no doubt that we will do well and represent our people well."

Earlier in the day, Malcomess drew 2-2 with Moroka and weer later defeated 1-0 by Seiphemelo.