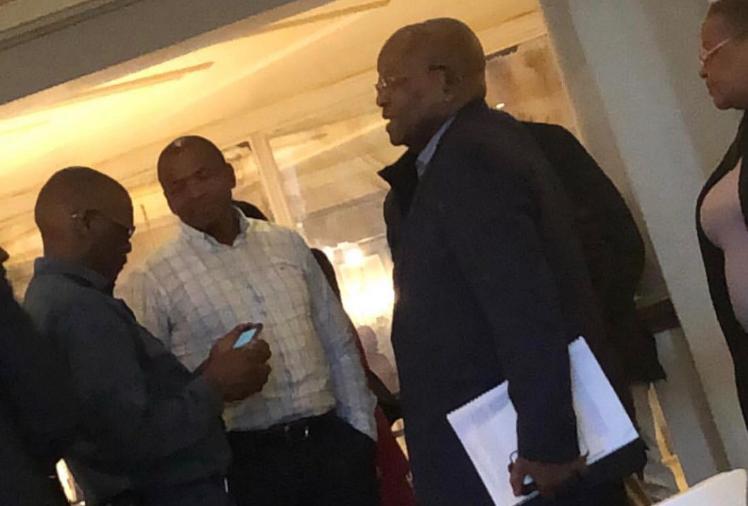 Ace Magashule, Supra Mahumapelo and Jacob Zuma at the hotel where they were alleged to have met.
Image: SUNDAY TIMES

A coincidence - ‘a remarkable concurrence of events or circumstances without apparent causal connection’ – that seems to be ANC secretary-general Ace Magashule’s explanation for the meeting of certain ANC leaders at a Durban hotel last week.

During an interview with eNCA, Magashule denied reports of being part of a meeting where leaders were plotting to oust President Cyril Ramaphosa; he instead stated that he had met with the leaders separately for various reasons.

Magashule said he was in Durban in both his official and personal capacity and conducted his meetings as such.

In his official capacity, Magashule met with Zuma and 'one of the chairs from Moses Mabhida', but met former SAA chairperson Dudu Myeni, and former North West premier Supra Mahumapelo, in his personal capacity.

These meetings were, however, held separately, according to Magashule.

He met with Zuma and Myeni separately and had lunch with Mahumapelo, he said.

Magashule also said that he believes Zuma and Mahumapelo met after his meeting with the former president.

The controversial meetings, which Magashule conducted without the knowledge of ANC leadership, were exposed by the Sunday Times at the weekend and were said to be about a plot to oust Ramaphosa.

Magashule has denied the allegations and said he does not understand how a journalist who was not part of the meeting could come to such a conclusion.

“The chap didn’t even ask me what the meeting was all about. He just came and said ‘hey I’m from the Sunday Times’ and we looked at the chap and he said ‘you had a meeting with president Jacob Zuma’. We looked at him and the chap just ran away,” Magashule said in the eNCA interview.

“How will a chap say we had a meeting and he even knows the contents of the meeting and that we’re plotting to … I mean it doesn’t make sense. This is why I need to approach the Press Council.”