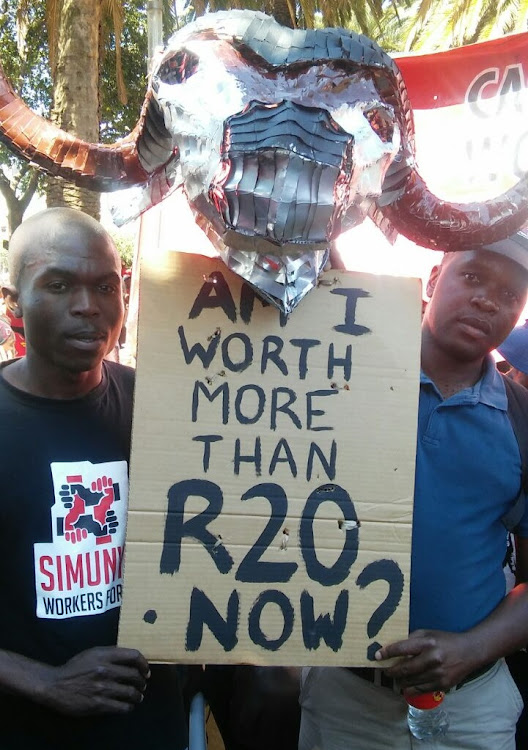 Khongelani Hlongwane and Thabang Mohlala of the Casual Workers Advice Office during the march against the minimum wage in Newtown, downtown Johannesburg.
Image: Penwell Dlamini

R20 an hour is worthy of a buffalo‚ not a human being. So said Thabang Mohlala‚ who on Wednesday joined a protest against the proposed minimum wage.

Mohlala said workers expected more from the ANC because it should understand the struggles of the poor.

Mohlala and his colleagues from the non-profit Casual Workers Advice Office in Germiston carried a buffalo effigy to draw the attention of President Cyril Ramaphosa to the plight of workers.

"We discussed it with the workers‚ who have a forum where they discussed issues. The workers came with the plan as to how we can bring the attention of the people to the seriousness of this issue‚" he said during a march organised by the SA Federation of Trade Unions.

Mohlala said although their organisation was not affiliated with Saftu‚ it supported the fight against the proposed national minimum wage.

"This is a disgrace to the workers. How in these current times can you pay such money? It's too small for the workers to live with ... They must give the workers a living wage of R12 500 because there is a gap between the working class and the rich bosses‚" he said.

"We are disappointed with the ruling party. We were hoping that it would prioritise the workers' needs but it seems like the workers are not prioritised in this country. President Cyril Ramaphosa bought a buffalo for millions of rands. We are saying: it is a buffalo that should make R20 an hour‚ not the workers."

Parliament's labour portfolio committee is currently discussing three bills that could see significant changes in the country’s labour laws. Some trade unions are opposing these bills and have embarked on a nationwide strike to underline their viewpoint.

About a thousand members of the South African Federation of Trade Unions (Saftu) in Durban have heeded the call to join a general strike against the ...
News
4 years ago

Protesters with burning tyres have shut down the N2 highway outside Grabouw near Cape Town.
News
4 years ago

Reports of intimidation in and around Elandsfonteinhave surfaced ahead of Saftu's national shutdown march.
News
4 years ago

The City of Johannesburg says there are protests taking place in the city that are not related to the national strike by the SA Federation of Trade ...
News
4 years ago
Next Article