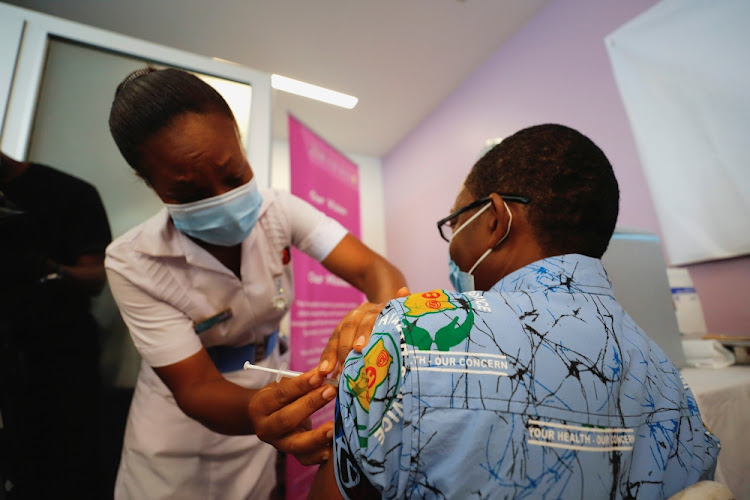 A health worker receives the Covid-19 vaccine during the vaccination campaign at the Ridge Hospital in Accra, Ghana, on March 2 2021.
Image: REUTERS/Francis Kokoroko

Most African countries will kick-start their Covid-19 vaccination programmes by the end of March as efforts to procure doses for the continent's 1.3 billion people gather pace, the World Health Organisation (WHO) said on Thursday.

The continent faces logistical and financial obstacles to securing all the vaccines it needs, but the WHO-led Covax facility has begun to bear fruit.

"This week Africa has been at the forefront of Covax facility deliveries, finally, with almost 10 million vaccine doses being delivered to 11 countries as of this morning," WHO Africa's Matshidiso Moeti told a virtual news conference.

"We expect that around half of African countries will receive Covax deliveries in the coming week and that most countries will have vaccination programmes under way by the end of March."

Covax, also led by the GAVI vaccines alliance and other partners, plans to send about 1.3 billion doses to 92 lower- and middle-income nations, covering up to 20% of their populations.

As of Thursday, Africa had reported at least 3,955,000 infections and 104,000 deaths. That is still a relatively small toll compared to other continents, with higher national death counts in the US, India, Brazil, Russia and the UK.

Nigeria received its first Covid-19 vaccines on Tuesday to kick off an inoculation programme in Africa's most populous nation, delivered under the ...
News
1 year ago

Lesotho has received 36,000 vaccines as part of an initial tranche of deliveries of the AstraZeneca/Oxford vaccine.
News
1 year ago
Next Article