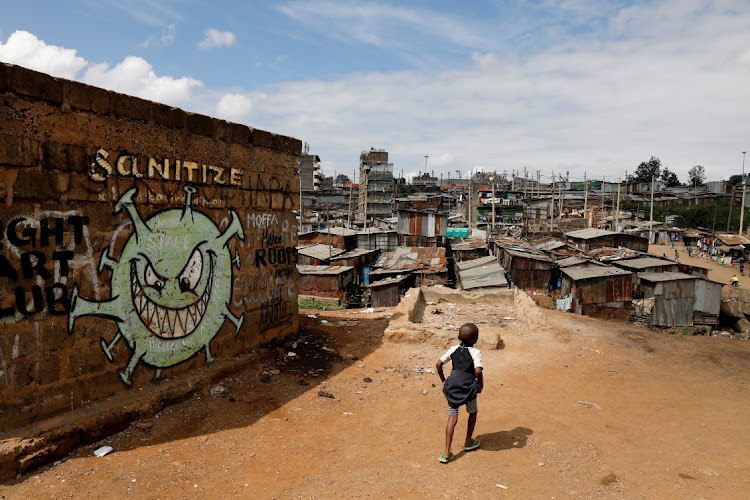 A boy walks in front of graffiti promoting the fight against the coronavirus disease (Covid-19) in the Mathare slums of Nairobi, Kenya.
Image: REUTERS/Baz Ratner/File Photo

Kenya welcomed the arrival of over a million doses of the AstraZeneca Covid-19 vaccine on Wednesday in its first batch under a global plan to ensure equitable distribution.

“We have received ... machine guns, bazookas, and tanks to fight this war against Covid-19,” Health Minister Mutahi Kagwe exulted as the doses arrived at Nairobi's main airport.

With fewer resources and tougher logistics than other regions, African nations are racing to secure the hundreds of million of doses needed to inoculate their populations against the disease and allow the safe reopening of economies.

Kenya, which has so far recorded 106,470 infections and 1,863 deaths from the virus, has seen a jump in the number of daily cases in the last two weeks.

Kenya's roughly 400,000 health workers will take priority when vaccinations begin later this week, Kagwe said, before other essential workers like teachers and police.

The doses which arrived on Wednesday came from the Serum Institute of India and were the first batch of an initial allocation to Kenya of 3.56 million doses by the COVAX facility, the ministry of health said.

COVAX, which is led by the GAVI vaccines alliance along with the World Health Organisation (WHO) and other partners, aims to deliver over 1.3 billion doses to 92 low- and middle-income countries, covering up to 20% of their populations.

Kenya said on Friday it was seeking an extra 11 million doses of Covid-19 vaccines, on top of 24 million already ordered, and hopes to have 16 ...
News
1 year ago

Kenya has identified two cases of the new coronavirus variant first seen in South Africa in two men who have since left the country, a senior health ...
News
1 year ago

Britain said on Wednesday it was helping Kenya prepare to roll out the Covid-19 vaccine developed by Astrazeneca and Oxford University, as African ...
News
1 year ago
Next Article