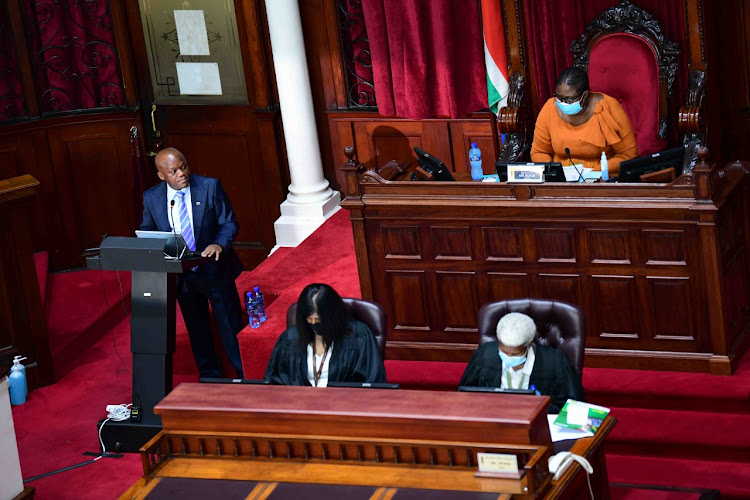 KwaZulu-Natal has vaccinated a total of 7,337 health workers since the beginning of the vaccine rollout programme, premier Sihle Zikalala said on Friday.

Zikalala delivered the state of the province address (Sopa), where he said the inoculation process was “progressing well”.

“At least 33,399 people have already registered for the first phase of the vaccine rollout in the province. Most of our health workers have reported a renewed sense of positivity and feeling protected,” he said.

“KZN received 10,800 vaccines in the first phase and we have vaccinated a total of 7,337 health workers at our two sites in Albert Luthuli and Prince Mshiyeni hospitals.”

But while the fight against the Covid-19 pandemic gains momentum, Zikalala said reducing pressure on the health sector by following the basics such as washing hands regularly, sanitising, wearing of masks, social distancing and being extra cautious when socialising in numbers was still at the centre of fighting Covid-19.

Taking stock of the impact of Covid-19 on the economy of the province, Zikalala said plans were afoot to mitigate the plight of the unemployed. He added that there would be a strong focus on restructuring the economy to ensure growth, address the imbalances in ownership patterns and create jobs.

“We will streamline all mass employment opportunities, repurpose it to ensure effectiveness. The purpose will be to ensure that more allocation goes to intended beneficiaries and less is spent on management and facilitation,” said Zikalala.

“All relevant departments, during the presentations of their budget votes will detail programmes, locations and numbers of jobs that will be created and the premier’s war room on job creation will provide an update report on a quarterly basis to the legislature.”

Top of the provincial government’s priorities this year is to intensify the fight against the coronavirus. It will also focus on:

The hardest hit industry due to Covid-19 is tourism. Zikalala said the government will be focusing on implementing a tourism recovery plan.

“Government has set aside R20m towards the KZN Tourism Relief Fund, aimed at providing relief to majority black-owned tourism businesses. The fund is modelled along the 2020 National Tourism Relief Fund and will be capped at R50,000 per business.

“This year, a strong focus has been placed on rural tourism, as well as on women and youth-owned businesses.”

As part of reigniting the economy, the province will also fast-track infrastructure development.

“Over the next three years, through infrastructure projects, we plan to create more than 233,000 work opportunities. This will benefit mainly young people and women-headed households,” Zikalala explained.

As part of the province’s preparations for the local government elections set to take place later this year, the government has set up a multidisciplinary enforcement task team that will proactively detect and attend to areas of potential threats. This plan, according to Zikalala, will be accompanied by a massive election-monitoring project involving volunteers, officials and volunteer lawyers deployed as election observers in voting stations for dispute resolution purposes.

“As we move towards the fourth industrial revolution, more than 200 schools will take coding and robotics as part of the curriculum in grades 8 and 9,” he added.

Sahpra CEO Boitumelo Semete said the data would be evaluated for safety, quality and efficacy of SputnikV vaccine.
News
9 months ago

Pfizer executive says a third dose of their vaccine will create a similar or better response than the second dose, and could be the logical next step ...
News
9 months ago
Next Article