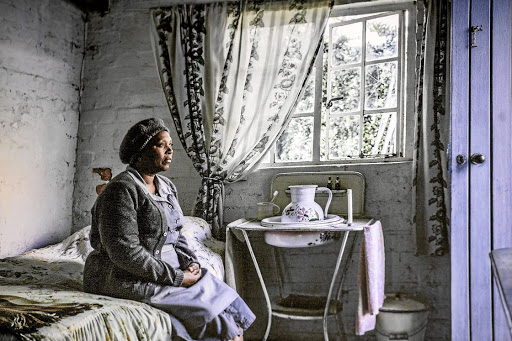 Clementine Mosimane stars in the lead role of 'Poppie Nongena' . The film, which won 12 awards at the recent Silwerskerm Film Festival, is based on the novel 'The Long Journey of Poppie Nongena'.

If Cry the Beloved Country was "a story of comfort in desolation", as the sleeve on the Alan Paton classic novel famously suggested, then The Long Journey of Poppie Nongena is a tale of courage in desolation.

Like its main character, the book has had an epic journey. Since it was published in 1978 with the Afrikaans title, Die Swerfjare van Poppie Nongena it has enjoyed a number of stage adaptations both at home and abroad.

The English translation, published in 1980, inspired a Market Theatre production that starred Nomsa Nene and the late Thoko Mgcina as Poppie Nongena and her mother.

The play was a huge off-Broadway hit in the early 1980s and became a first on American stages to cast a South African actress in the lead role. It earned the talented Soweto-born actress two nominations in the Star Woman of the Year and Computicket's Best Afrikaans Actress in 1980/81.

The following year Nene was included in Fair Lady magazine's Who's Who of South African Women - all these remarkable, trailblazing achievements for a black female performer at the height of apartheid.

Now fellow actress Clementine Mosimane has followed in the footsteps of her Orlando East homegirl and childhood idol in the retelling of this epic tale. A household name in screen acting, Mosimane plays the lead role of Poppie while Nomsa Nene portrays her mother, Lena Williams.

The international best-seller is based on a true story of a Xhosa domestic worker with roots in Gordonia (Upington), an arid and bleak frontier part of the Northern Cape. 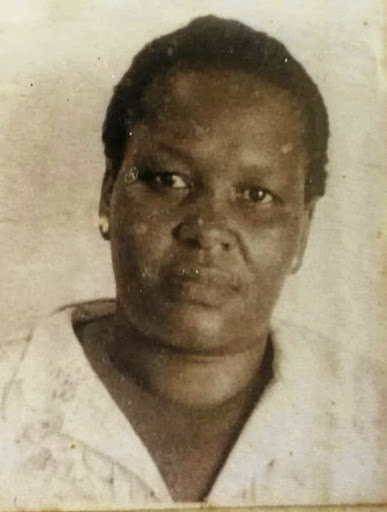 Despite its ethnic diversity, a brand of lively colloquial Afrikaans is the lingua franca. The family, a hardy clan of goat farmers and labourers, later resettled in Lambert's Bay, a thriving fishing village on the Atlantic coast. Here they enjoy a contented, idyllic existence. She marries Stone Nongena, a migrant worker from the village of Herschel in the Eastern Cape. He's a good husband and father, an honest and hardworking boilermaker. But their paradise is rudely disrupted when the authorities decide to remove them to a shantytown in Cape Town.

Poppie's real hardships begin in the Mother City as she's confronted with the brutality of bureaucracy and a government that's hell-bent on frustrating the African majority through a slew of discriminatory laws.

Although she finds a job as a domestic worker in the white suburbs, her stay in the city is not guaranteed.

Already a victim of forced removals and land dispossession, she's now confronted with the harsh pass laws. She was brought to Cape Town against her will, but the government now plans to evict her and thousands of other families.

Their destination is the Ciskei, a rural area in the distant Eastern Cape that she has never heard about before. Her crime was marrying someone from the countryside.

Ciskei is part of the authorities' segregationist project named grand apartheid - a homeland system that's designed to divide Africans along ethnic lines and control their movement in the cities, the so-called white areas. So for 10 years Poppie fights to live in the city to keep her family together.

However, she is eventually forced to relocate to the Eastern Cape without her husband who remains in Cape Town and lives in a hostel.

The system divides and destroys families. Men are allowed to live in urban centres because the white world requires cheap labour in the factories to get the economy going.

New houses are being built for black people who are facing eviction from Cape Town to new townships such as Zwelitsha and Mdantsane in the Eastern Cape.

Poppie Nongena and her children have been allocated a house in one of these impoverished and soulless settlements. Here there's no work and money but she's determined to feed, clothe and educate her children against all odds - a strong woman with an indomitable spirit. 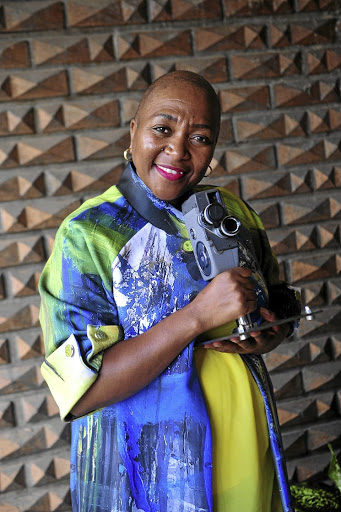 Clementine Mosimane's upbringing also involved women who shared Poppie's qualities - feisty and defiant characters who didn't brook nonsense from anyone, particularly from white people, including policemen. Her maternal grandmother, Sally Tema (nee September) was an Afrikaans-speaking Xhosa woman who was born in the Western Cape.

"She was also a domestic worker and she's said to have hit a policeman during the riots of 1976," she recalls.

The Afrikaans background explains why Clementine is remarkably proficient in the language, an asset that impressed film producers during auditions.

"I had to search deep inside me to get into this character and understand her fully so that I could portray her to the best of my ability. This is a woman who is found in every black community, someone who keeps the home fires burning despite her extra responsibilities as a domestic worker who works long hours with little pay and raises other people's children - not to mention demanding household chores like cleaning, washing, ironing and cooking."

She describes Poppie as a woman with love, faith and hope for a better future despite her challenges.

Educated at the prestigious Stofberg mission boarding school in the Free State, Clementine's late mother was never employed as a domestic worker but throughout her life she was exposed to similar unfair working conditions that included the disrespect and abuse of women by their male counterparts - black or white.

Sophie Tema is the doyenne of female journalists and one of the unsung heroes of the June 16 1976 uprisings. Women contemporaries she had, but one can't think of anyone older or more experienced in her craft. Tema started her journalistic journey as switchboard operator at Elethu Mirror, a Johannesburg-based newspaper edited by Humphrey Tyler. When he transferred to The World newspaper as editorial director the late scribe went with her.

As a reporter, Tema was assigned by its editor, the late Percy Qoboza, to cover the uprisings. She had been invited to attend the clandestine meeting organised by students on the eve of the uprisings, which explains the clarity and insightfulness of her articles on the tragic events.

On the morning before the march she addressed students and urged them not to provoke the police as this was supposed to be a peaceful and orderly march. After unprovoked police shootings disrupted the march, she drove the fatally wounded youngster, Hector Pieterson to Phomolong Clinic.

Incidentally, the June 16 uprisings are a crucial chapter in the Poppie Nongena story and the movie reflects this tragic episode in our sad history with haunting images.

Did Clementine's parents have any particular preferences regarding her career path during her childhood?

"They were liberal people, not the type who would impose their expectations on their children. I wanted to become a doctor and they were happy with that."

She was involved in school dramas - the sketches. 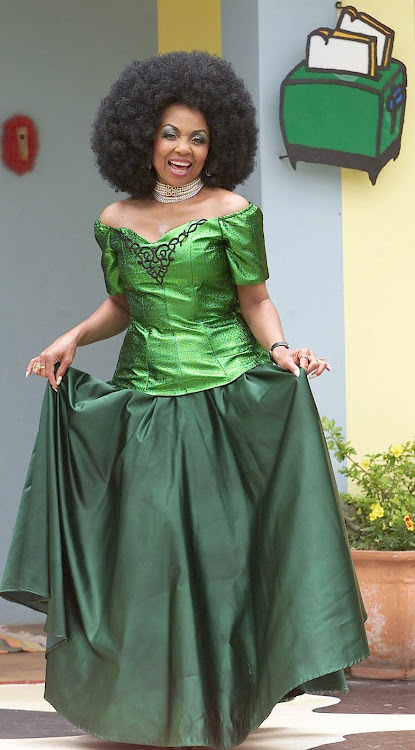 "The constant praise from teachers and classmates convinced me that I could pursue acting as a profession."

But in the early 1980s black television was still in its infancy. In Grade 10 she landed her first TV gig as presenter of a youth magazine programme. That's how close she got to journalism before the acting bug consumed her.

Most of her early drama roles reflect the injustices Poppie Nongena experienced.

Some will remember her in the Setswana drama series, Matswakabele as Maphefo, one of Masenya's (George Leballo's) several girlfriends who are left holding babies by the spoilt playboy. Her other character in another Setswana drama, Tlhakantsuke, experiences a similar fate.

In Chikin Biznis... The Whole Story (1999), a warm and hilarious comedy, she's Busi, an abused wife who hopes for some respite when her husband is convicted of a violent crime. But he returns and learns that she has had an affair with Sipho (Fats Bookholane), who is married to Thoko (Connie Chiume). In real life Chiume, seasoned actress and one of her role models in the industry, taught her at primary school.

These are some of the groundbreaking portrayals that have prepared her for the role of her life on the big screen. It is an outstanding performance that has contributed to the film scooping 12 of the 15 awards that were on offer at the 9th kykNET Silwerskermfees (Silver Screen Festival) held in Cape Town in August last year. It is the biggest haul for a single film at the M-Net-sponsored annual festival. It swept the boards in all the categories it received nominations in, including best actress, best supporting actress, best director, best feature film and best screenplay.

Mosimane dedicated her award to all women, in particular domestic workers. "Poppie Nongena was not an easy movie to make, but I believe the story is still as relevant as it was when it was written 40 years ago. It tells us about the difficult road the majority of South African women have travelled and where we are going as a society. Sadly, only a few South Africans know Poppie despite the fact that she's an iconic figure among black women in domestic service."

So who was the real Poppie Nongena? According to her ID, she was born Ntombizodumo Eunice Msutwana on February 28 1936 in Upington and was raised in a shantytown named Blikkies. Her Xhosa name is prophetic and means "girl born from a line of famous women". While still in her teens she got married to a Ntsata, a migrant from the Eastern Cape.

The mother of five was only 56 when she died of cancer in April 1992 in Khayelitsha, Cape Town.

Author Elsa Joubert, 97, remembered her as an intelligent person with a great memory for details, an attribute that explains the novel's comprehensive narrative quality.

Poppie Nongena was not an easy movie to make, but I believe the story is still as relevant as it was when it was written 40 years ago

The grand dame of Afrikaans literature, Joubert and Eunice Ntsata had known each other as madam and maid for about two years when she decided to write her story.

It was first serialised in Rapport, a popular Afrikaans weekly newspaper and immediately made a huge impression on its largely white conservative readers. A stage adaptation of the book was prescribed in schools and performed locally and internationally to sold-out venues.

A work of exceptional literary merit and substance, Die Swerfjare van Poppie Nongena (Tafelberg, 1978) achieved bestselling status overnight and won several prizes for literature and drama. The celebrated work has been translated into 13 languages. It has enjoyed several reprints. Clementine Mosimane's beautiful face graces the cover of the latest edition. As Alan Paton has observed in the foreword of the 1980 English translation simply titled Poppie, "One is left with two overriding impressions. One is the courage of this woman in her never-ending struggle to live under the cruelty of the laws. The other is the art of the woman who tells her story."

Thabethe having lots of fun gigs.
Entertainment
3 years ago

One of South Africa's sought-after musical productions The Color Purple is heading to Shanghai, China, for a series of performances.
Entertainment
1 year ago

The BVSM (Backing Vocalists and Session Musicians) awards founded by Yvonne Chaka Chaka are making a comeback for a third installment after hitting a ...
Entertainment
1 year ago
Next Article