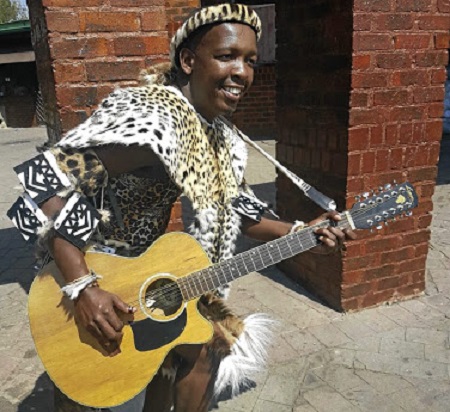 Maskandi sensation Mbuzeni Mkhize is riding the crest of a wave.

Mkhize, 32, is set to record a song with American superstar Rihanna, and admits that the collaboration has opened doors for him. He says he is now getting more bookings than ever.

The talented guitarist proved on Tuesday why he has been a hit lately while performing at the 17th Annual Heritage Day Celebrations at Imbizo Shisanyama [Busy Corner] in Ebony Park near Tembisa.

Collaborating with another talented maskandi singer Ichwane Lebhaca on a song titled Wemathongo, the duo left the crowd calling for more.

They performed alongside Igcokama Elisha, Mzukulu, Makhadzi and Benny Mayengani, among others.

"What I saw at Busy Corner was out of this world. The crowd was amazing. It was pleasing for us as artists to celebrate Heritage Day that way.

"I worked with Chwane because we are both trained traditional healers and also musicians. The aim of the song is to lift the spirits," Mkhize said.

The song seems to have hit the right note with fans because after that Mkhize said he had been inundated with calls from people who want to be trained by him.

Mkhize is heading to the US on October 18 for an international performance. He is also scheduled to perform in England on December 1.

The revered guitarist will meet Rihanna on December 25 in the US.

Mkhize is a well-known globetrotter, having performed in cities such as Moscow in Russia, Beijing in China, New Delhi in India, and Istanbul in Turkey.

GUITARIST and singer Nothembi Mkhwebane is one of the South African artists who will perform at the South Africa-India festival in India from April ...
Entertainment
9 years ago

"I am happy that I am getting bookings both locally and internationally. I am taking maskandi music to international stages while earning the genre the respect it deserves. Honestly, I am looking forward to meeting Rihanna and to working with her," he said. Mkhize, who has released seven successful albums, is a talented individual who can produce, play multiple instruments that include the guitar and keyboard, and arrange music.

He recently collaborated with Bongo Muffin on a song that will be part of the group's upcoming album.

In 2013, Mkhize was honoured in the Netherlands for promoting African traditional music.

Is Rihanna the best-smelling celeb? Yes, say those who have met her

Rihanna smells so good... its like "heaven"
Entertainment
2 years ago

Is this what Rihanna's future daughter will look like?

Rihanna and her fans were shocked when the singer discovered that she has a baby doppelganger.
S Mag
2 years ago

Musician and businesswoman, Rihanna hasn’t released an album since 2016 and fans are begging her to drop one.
S Mag
2 years ago
Next Article