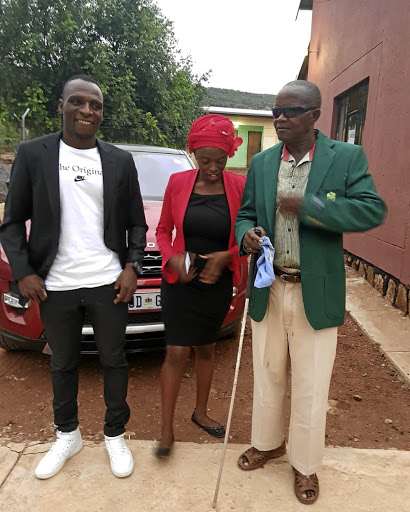 Rodney Magalela surprised his blind father Frans with a new car on his birthday. They are with his sister Rierenda.

You can take the boy out of the village but you cannot take the village out of the boy. So goes the refrain or something along those lines. This holds true to Rodney Ramagalela from Mamvuka Nhzelele in Venda.

"I am someone who values family a lot and also my community. My village has made me who I am and I will never turn my back on them," explains the Highlands Park striker.

While he has earned countless admirers in the span of his career, Ramagalela says his blind father, Frans, is his biggest fan. "My dad has been blind ever since I was young. He got into a car accident when I was five and lost his sight," says the goal poacher fondly known as Rama-G.

"The reason I do interviews in my home language of tshiVenda is so that he can hear me. I dedicate my games to him."

As with most people who grew up in the former homelands, Rama-G grew up in an underprivileged household but his father somehow always provided for the family.

"Even though we had nothing, when I grew up my dad always made a plan to buy me boots so that I can play football. It's because of him that I am here today."

He adds that he bought his dad a car on his 55th birthday recently. "I got him a car on his birthday and he has someone who drives him around."

The 30-year-old is also involved in an initiative to provide underprivileged girls with sanitary pads.

"As you know young girls in the villages don't have much so I provide them with these [sanitary pads]. It makes a big difference because they don't have to skip school anymore."