In Africa, football is surely a way of life 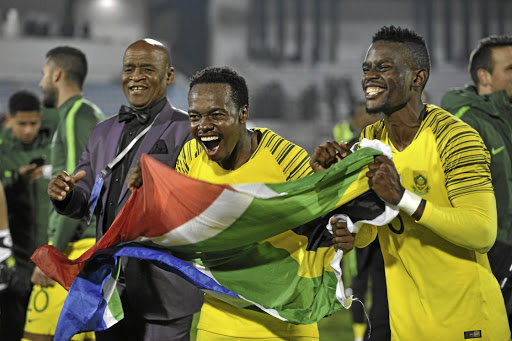 It only took 90 minutes of thrilling football last Sunday night for Bafana Bafana to move from the tag of "bunch of losers" to become the darlings of Mzansi football and, once again, be famously known as a "bunch of winners".

This was the scenario after the national team proved their mettle by emphatically beating Libya to qualify for the 2019 Africa Cup of Nations to be hosted by Egypt in June.

Immediately after the nail-biting clash that had everyone at the edge of their seats, SA went on an unprecedented euphoria, with impromptu celebrations reverberating across the country.

Star forward Percy Tau did the trick, but sadly, he had to settle for Belgian second-tier outfit Royale Union Saint-Gilloise, a league we don't even get to see on TV, after being loaned by English Premier League side Brighton.

The celebrations spilled over to Tuesday as fans brought the OR Tambo International Airport to a standstill, singing, dancing and hugging in excitement when they welcomed their heroes back from the Tunisia battle field.

After failing to qualify since 2015, coupled with missing the plane to the World Cup in Russia last year, Bafana will take their place of pride in the newly expanded 24-team African football showpiece in Egypt between June 21 and July 19.

The lifting of the spirits of the ordinary football fans just goes to prove that football is a way of life on the African continent.

If your national team players are losers, you bow your head in shame, but as soon as they triumph, national pride is reinvigorated.

Bafana Bafana’s record goal-scorer Benni McCarthy is glad to see that Percy Tau has taken to heart a piece of advice he shared with the current star ...
Sport
3 years ago

Football in Africa is not played on pristine, lush-green surfaces. You are lucky to have an Astro-turf field donated by Fifa's development foundation. Most African stars playing in Europe's big leagues had their talent nurtured on sandy, rocky grounds in the townships and villages.

In West African countries like Nigeria, Senegal, Ghana and Cameroon, it's no big deal qualifying for Afcon finals. Teams are expected to qualify. Teams are a national pride. If their team is a world-beater, it gives the ordinary man in the street bragging rights. When the team is playing, the passion is palpable. In some African countries, football is a religion of some sort, it's a way of life.

As much as a section of the SA population prides itself in rugby as their No1 sport and would not let go, the same should be the case with football, a sport followed by the masses.

In other parts of the continent, wives and girlfriends play second fiddle to the national team as far as the obsession goes. Men go around carrying radios so as not to miss a fraction of the action when the team is in action.

Fans gather at restaurants and drinking holes when the national team is playing to watch the action live. For some, it's a form of escapism from the harsh realities of poverty and corruption among politicians.

Football becomes a unifying factor. Tribalism and different religious beliefs take the back seat because national pride is at stake.

So, it is imperative for Bafana players to realise that they are not playing for themselves or to enrich themselves with Safa bonuses when they don the national team jersey. They are doing it for the millions whose hopes are pinned on their success. After all, football on the continent, likewise in Mzansi, is a way of life.