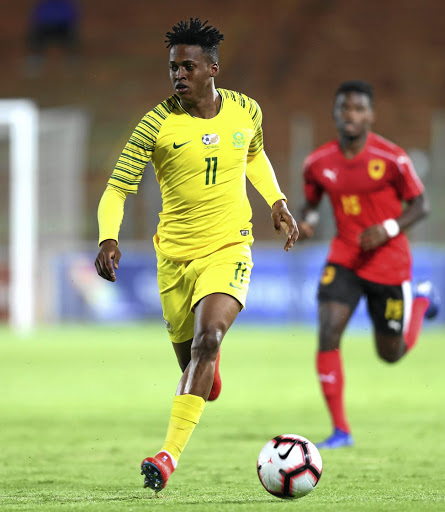 Pacey winger Luther Singh has backed the current U23 team to go on and represent the senior national team, Bafana Bafana.

The focus now is on this current crop to qualify for the CAF U23 Cup of Nations to be hosted by Egypt later this year.

The end goal is to qualify for next year's Olympic Games in Tokyo, Japan.

Singh and Company have been entrusted with the responsibility to help the nation finish in the top three in the Afcon and book their spot in Asia.

If anything, the Portugal-based forward is excited about the U23 squad and believes many would end up in the Bafana setup.

"When (Safa) president (Danny Jordaan) and the coach (David Notoane) tell us these things (that we are future Bafana players), it inspires us," Singh said.

"We know we are going somewhere and together we can do it. So when we are together, we know that by 2022 the majority of this team would be representing Bafana."

The 21-year-old is still some rough diamond. He can score a goal like he did against Angola on Tuesday, which SA won 3-0, and the next moment make a poor final pass.

He's however been making steady progress in Portugal, where he turns out for struggling Primeira Liga side GD Chaves on loan from SC Braga.

Singh boasts three goals and four assists in 20 matches this season. "I think things have been going well for me and I'm happy where I am right now. I have to work harder and good things will come."

Youth vs experience in goal for Bafana Bafana

World Cup is the ultimate dream for Bafana, Jordaan says

Bafana to get bonuses - but only after the finals in Egypt

Bafana Bafana players are not expecting incentives bonanza for qualifying for the Afcon, but Safa will work out a bonus structure for the tournament.
Sport
2 years ago
Next Article