Mkhwanazi ... the Wits and Bafana defender who is so efficient you barely noticed him 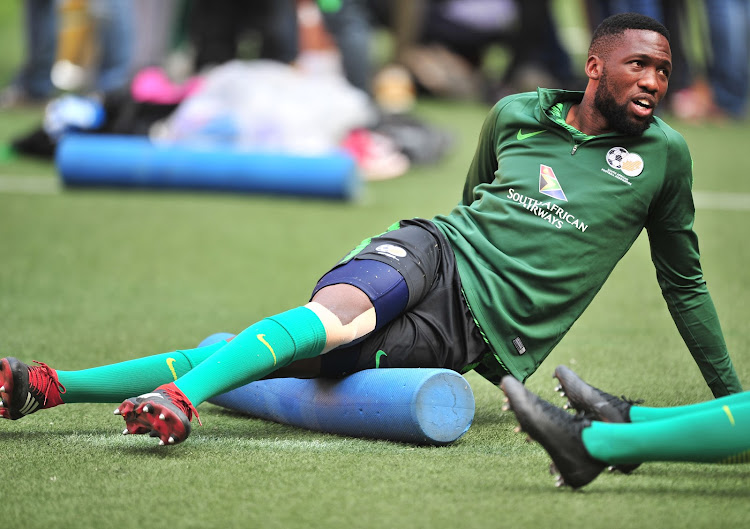 Buhle Mkhwanazi has quietly gone about doing a sterling job for both South Africa and his club Bidvest Wits.

So quietly‚ you probably did not even see him doing it.

Mkhwanazi’s centreback job‚ and the manner in which he carries it out‚ is a thankless one because he’s not flashy‚ but if you pay enough attention you’ll realise how much ground he’s actually covered.

Mkhwanazi has featured in all 90 minutes of Bafana Bafana’s last five Africa Cup of Nations (Afcon) qualifying games playing alongside his Wits and SA skipper Thulani Hlatshwayo at the heart of the defence.

That tells a story of how dependable he’s been for the national team on their path to reaching Egypt 2019. And also how quietly efficient‚ because‚ in all honesty‚ who noticed him there?

The same can be said of his value at the Clever Boys. He’s started 19 of the club's 24 league games this season. The statistic of just six yellow cards and no reds clearly illustrates how clean his game has been for a tough-tackling defender.

The Bloemfontein-born centreback is‚ however‚ not nearly as quiet a figure when he’s talking football off the field.

He’s a great listener and his answers mirror that of an experienced communicator who’s faced many challenges and questions in his life.

Mkhwanazi is ecstatic about Bafana qualifying for the Afcon and feels the team have done well enough that they can be among strong contenders at the showpiece in Egypt in June and July.

“We are obviously happy that we managed to win against Libya [2-1] on Sunday‚” said Mkhwanazi‚ who was again a solid presence in Bafana’s victory in Tunisia that clinched qualification.

“It wasn’t easy because if you can check‚ the referee was on their side‚ somehow‚ but we managed to go through.

“They won a penalty that was not a penalty‚ but we managed to get Percy Tau giving us the victory. But the team as a whole really did play a huge part in letting Bafana go to Egypt.”

As far as what he thinks Bafana can do in Egypt‚ Mkhwnazi displayed his defending skills to a maximum‚ diplomatically avoiding putting anyone under pressure while also not ruling out a strong showing.

“First I think we just have to make the country proud‚” he said.

“We need to give our all and mustn’t just go there to add numbers. I’m confident that we will give it a good shot.

“Checking how we have been playing recently‚ it’s really giving a breath of life to the players.

"We have a nice feeling that we can give it our best shot and South Africa will be happy‚ I’m sure.”

Wits host Chippa United in the Nedbank Cup quarterfinals at Bidvest Stadium on Saturday night (kickoff 8.15pm) and Mkhwanazi is confident of victory if they don’t underestimate their visitors based on relegation-threatened Chippa’s struggles in the Premier League this season.

“Chippa will be very difficult because they are down there and we don’t know whether they want to win this one‚” the 29-year-old defender said.

“Maybe they might try to revive themselves by winning the cup game and taking that form to the league. But we have to be strong and just use the advantage of us playing at home.”

Speaking from the experience that Wits had when they struggled with form last season following their league triumph in 2017-18 season‚ Mkhwanazi said the Clever Boys cannot underestimate what Chippa are capable of.

“Every game that you play [when you are near the bottom]‚ it’s like your last game‚ last breath‚” Mkhwanazi explained.

“That’s how we were feeling last season. Every game was like‚ ‘Gents‚ if we don’t win this one we are out of jobs and we are not getting salaries’ – that kind of a thing.

“Obviously Chippa are hungry and really want to win each and every match‚ and that’s whether it’s a cup or league game.”

That’s all quite a mouthful coming from a player one hardly notices when he’s dishing those vital tackles on the field of play.